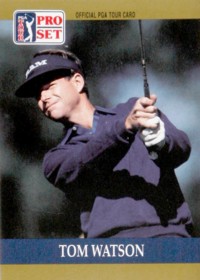 Tom Watson was the only golfer who ever came close to challenging Jack Nicklaus as the most dominant player in golf.

From 1974-83, he won eight major championships and 28 tournaments overall on the PGA Tour. In the same time frame, Nicklaus won six majors (and 18 PGA Tour events).

To be sure, Nicklaus had been on the tournament circuit for 12 years when Watson won for the first time on the PGA Tour -- the 1974 Western Open -- and had cut back on his schedule of appearances to some extent, but Nicklaus's capacity for great golf, and the longevity of it, was so colossal that the comparison between the two is valid.

Thomas Sturges Watson was born in Kansas City, Missouri, in 1949. Although a most promising golfer from the start, Watson did not have an especially remarkable amateur career.

He won his share of smaller amateur events, but none of the prestigious ones. And in playing for the Stanford University team, he did not shine as his future record would suggest he should have.

It took him three years on the PGA Tour, which he joined in 1971, to win for the first time. When he did have a chance to win a major title, he showed a tendency to weaken down the stretch.

He led the 1974 U.S. Open by a shot after three rounds, but he finished with a 79 to end up tied for fifth. The next year, in the Open, he opened with rounds of 67-68 to take a three-stroke lead, but he shot 78-77 to finish in a tie for ninth. After this, he was considered something of a choker. He proceeded to put the slur to rest, with a fury.

In 1975, Watson broke through to win the British Open, in a playoff with Jack Newton. Winning his first major in Great Britain was fitting, for Watson always had a particular affinity for playing there. The often wet weather smacked so much of the golf he played growing up in Missouri. Also, he had always expressed a fondness for the grand traditions of the old Scots' game.

All golfers' careers in the Nicklaus Era were naturally measured against Jack's, and Watson had two significant high points. In 1982 at Pebble Beach, it appeared Nicklaus would win his fifth U.S. Open. But Watson chipped in from a heavy lie in the fringe off the 17th green for a birdie-2 and a one-shot lead, which he maintained. The chip-in was an unforgettable moment. But the two of them had already gone one better.

In the 1977 British Open at Turnberry, Scotland, Watson's victory over Nicklaus was the most dynamic one-on-one confrontation in golf history. They both shot 68-70 in rounds one and two, then the fireworks began. Watson and Nicklaus, playing together, matched 65s in round three. Again together for the final 18, they had left the field so far behind that when they came to the 72nd hole, either one of them could 10-putt and finish runner-up.

Leading by a stroke going to the last hole, Watson drove perfectly in the fairway. Nicklaus drove into deep gorse. Watson played an 8-iron approach to within 30 inches of the hole. Miraculously, Nicklaus freed his ball from the thicket with an 8-iron, the ball finishing 32 feet from the cup. He then ran the putt in for a round of 66. He had beaten the British Open 72-hole scoring record by seven shots -- and still lost. Watson holed for a 65.

Watson also won two Masters, both in duels with Nicklaus. In the final round in 1977, Nicklaus caught up with Watson at the 13th hole. But when Watson holed a 20-foot birdie putt at 17, Nicklaus wilted (at 18), and Watson won by two. He won it again in 1981 by two over Nicklaus and Johnny Miller.

Watson would continue his powerful, well-thought-out golf through 1984, when he won three times on the PGA Tour, but then his game went into a steep decline.

It was almost as if all the bold putting that was his trademark had caught up with his nerves. His putting approach continued to be aggressive, but all of a sudden he could no longer make the three- and four-footers coming back. Perhaps he needed Nicklaus to inspire him, but by the mid-1980s Jack was finally beginning to wind down his competitive career.

Interestingly, while Watson's ball-striking got better and better -- his tendency toward wildness off the tee had been well tamed -- his putting from short distances under ultimate pressure got worse and worse. He became a rather sympathetic figure as he missed one after another in the clutch, and a new generation of younger stars was beginning to emerge.

He continued to fight the good fight, though, and in 1996 won for the first time in nine years. Ironically, the victory came at the Memorial Tournament, an event begun by, and played on a course designed by, Jack Nicklaus.