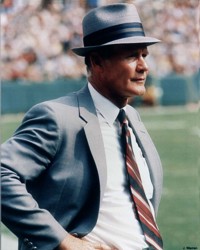 Tom Landry paces the sideline. In his mind, he's already a half-dozen plays ahead of the game on the field. See more pictures of football.

Tom Landry was the head coach of the Dallas Cowboys for the first 29 years of their existence.

The always-stoic Landry began his coaching career as a player-coach with the New York Giants in 1954 and 1955.

By the time he became the head coach of the expansion Cowboys four years later, he was already widely recognized as one of the sharpest young coaches in the game.

As expected, it took a few years before the Cowboys experienced a winning season. But once they did, it seemed they'd never again falter.

Under Landry, the Cowboys posted 20 consecutive winning seasons from 1966-85.

Landry's coaching career was full of amazing accomplishments. He perfected the "flex defense," a variation of the basic 4-3 alignment, which he used while an assistant coach.

Later, when teams copied his system, he simply came up with multiple offense schemes to attack the very defenses he developed.

In the 1970s, the innovative coach borrowed a page from the San Francisco 49ers' play book of the early 1960s and gave new life to the "shotgun" formation. Roger Staubach, the Cowboys' shotgun trigger man, flourished under the system.

In the 1980s, Landry embraced and helped develop the "situation substitution" concept of inserting players on certain downs for specific assignments.

Landry's coaching career came to an abrupt end early in 1989, when a new Cowboys owner decided to bring in his own coach. Even then, Landry showed his class when he said, "There's always life after football."