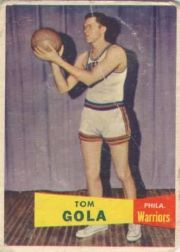 Tom Gola was the nation's best amateur basketball player during the mid-1950's, well before the rise of superstars like Bill Russell and Wilt Chamberlain. A 6'6" jack-of-all-trades at La Salle University, Gola was a catalyst of two championship teams and set an NCAA career rebounding record (2,201) that has never been matched. He played 10 seasons in the NBA, capturing one title and winning widespread acclaim for his passing, defense, and rebounding.

Gola was one of the few players of his era capable at all five positions. He played center in college, dominating inside with up-and-under moves and hook shots, then moved to guard as a professional and became a crackerjack playmaker. Scoring never was his first priority; he was more concerned with playing a steady, intelligent brand of basketball. His nickname -- "Mr. All Around" -- spoke volumes.

Born January 13, 1933, Gola honed his game in Philadelphia church leagues before starring at La Salle. In 1954, after the Explorers had captured one NIT championship (in 1952) and one NCAA championship (beating Bradley in 1954), coach Ken Loeffler said his team was little more than "four students and one ball player." Gola averaged 20.9 points and 18.7 rebounds during his career and was a three-time All-American.

Gola stayed in Philadelphia after college, joining the Warriors in 1955 as one of the NBA's last territorial draft picks. In his first season, the Warriors won the NBA championship, beating the Fort Wayne Pistons in the Finals, and Gola averaged 10.8 points, 9.1 rebounds, and 5.9 assists. The Warriors added Chamberlain in 1959 and became the most potent offensive team in the league, but they couldn't get past Russell's Boston team in the playoffs.

In the 1961-1962 season, Gola averaged 13.7 points, forward Paul Arizin averaged 21.9, and Wilt averaged 50.4, but the Warriors lost to the Celtics in seven games in the Eastern Division finals.

Gola moved with the Warriors to San Francisco for the 1962-1963 season, only to return east a couple of months later when he was traded to the New York Knicks. A five-time NBA All-Star, Gola retired in 1966. He was elected to the Hall of Fame in 1975.