by Dave Coustan
NEXT PAGE 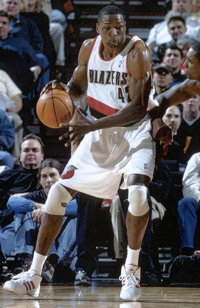 From his early childhood to his career in the National Basketball Association, Theo Ratliff has overcome obstacles that could have kept him on the sidelines for good. He has demonstrated an impressive ability to adapt to circumstances beyond his control -- from a congenital leg problem to a series of career-threatening bone and muscular injuries. Ratliff's work ethic is intense, but his easy-going attitude allows him to accept adversity as it comes. He has silenced critics by turning his most obvious disadvantage -- his comparatively smaller, leaner frame -- into an asset that places him in an elite class of shot blockers. Ratliff explains:

The last couple of years are the only years people haven't said that you need to gain weight. And I've already been in the league, going on my tenth year. It's always been something that people talked about ... but I always countered them by saying I'm more agile, and I'm quicker than a lot of the guys I play against, so that gives me an advantage. Me getting weighed down and getting slow, that would give me a disadvantage ... so why would I listen to you?

Ratliff's accomplishments back up his words. In the 2003-2004 NBA season, playing for the Portland Trailblazers, he led the league in both total blocked shots and average blocks per game. In this article, HowStuffWorks looks at Theo Ratliff's struggles with injury, his approach to the game and the changes in his routine that have contributed to his two most dominant and injury-free years in the league to date.