The Top 30 Songs of Elvis Presley

Browse the article The Top 30 Songs of Elvis Presley 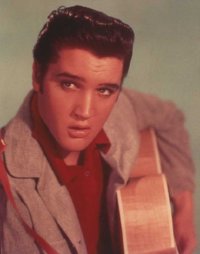 Elvis Presley is known as "The King of Rock 'n' Roll."

You don't become "The King of Rock 'n' Roll" without your share of number-one songs. Here are 30 of Elvis Presley's chart-topping songs.

Released on January 27, 1956, this heart-wrenching tune was inspired by a suicide note printed in The Miami Herald. The tune didn't catch the public's attention until Elvis started appearing on television in the months following its release.

This was the first song that Elvis self-produced. And what a job he did! Not only did he rack up his second number one in three months, he also created a whole new style for himself -- one characterized by a free, casual sound.

This song was a blues classic long before anyone had heard of Elvis Presley. But it was the King's July 1956 TV appearances, in which he crooned to a real pup, that propelled it to the top of the pop charts. The machine-gun-like drumming of D. J. Fontana perfectly complemented Elvis's edgy vocals.

This song's tune came from a Civil War ballad called "Aura Lee." The lyrics were written for Elvis's first movie, also called Love Me Tender. The movie -- a depiction of the notorious Reno Brothers Gang -- was forgettable; the song was anything but!

Released on January 4, 1957, "Too Much" brought to the forefront the talents of Elvis's supporting players, especially guitarist Scotty Moore. And, of course, the King sounds great, too!

You can't help but dance to this great tune. Released in March 1957, it epitomizes the rock 'n' roll sound that energized teens all over the world. Listen for the sound of Elvis slapping his guitar.

Teddy bear sales went through the roof with this June 1957 hit. The song's popularity also helped get people into theaters to see Elvis's second movie, Loving You.

"Jailhouse Rock" marked Elvis's third foray into film and gave him another number-one song. Even if the song hadn't been a hit, the movie's dance sequence alone would have made it memorable.

This ballad, written by Jerry Leiber and Mike Stoller, brilliantly conveyed the teen angst felt by the majority of Elvis's fan base. Elvis put his heart and soul into the lyrics, connecting on a personal level with listeners, and it was one of his personal favorites.

Released on June 10, 1958, this hit came out of the movie King Creole, which would be the last movie for Elvis until 1960, after his discharge from the army.

On the next page, you will find more of Elvis' top songs, including "Are You Lonesome Tonight?" and "Stuck on You."

In this segment of our list of Elvis Presley's top 30 songs, you will find "Stuck on You" and "It's Now or Never."

"One Night" was a hit for New Orleans blues musician Smiley Lewis just two years before Elvis covered it. The lyrics and overall sound were softened to appeal to a white teen audience.

Elvis liked this Hank Snow song so much that he covered it, adding his own special flavor. In fact, many people regard it as their favorite Elvis tune.

This song came from the only recording session that Elvis made while in the army. That session was also his first without his original backing band.

Fans wondering if a post-army Elvis still had it could rest assured with the release of this easy-listening track. Yet, this Elvis was different -- more mature and sophisticated.

Elvis's musical maturity is fully showcased in this ballad. Elvis had worked on developing his vocal range while in the army, and the operatic notes in this song demonstrate this new ability.

This old Al Jolson hit from 1927 just happened to be a favorite of the wife of Elvis's manager, Colonel Tom Parker. In fact, it was the only song that Parker specifically asked Elvis to sing.

This hit was an adaptation of the Italian-Neapolitan ballad "Torna a Surriento," a hit song for Dean Martin, one of Elvis's inspirations.

Released on August 8, 1961, this fun tune came from the writing team of Doc Pomus and Mort Shuman. The single was paired with "Little Sister," its mirror opposite in terms of style and mood.

This much-loved tune, which appeared in the movie Blue Hawaii, was actually based on an 18th-century French ballad. In the 1970s, Elvis often used the song as the closing number for his shows, including his final concert in June 1977.

A lightweight, feel-good song that struck a chord, this tune epitomized the sound popular with teens of the early 1960s.

On the next page, you will find more of Elvis's top songs, including "She's Not You" and "Return to Sender."

Here is our final set of Elvis Presley's top 30 songs, starting with "She's Not You."

A beautiful ballad that Elvis sang with deep conviction, this song has the power to move and inspire.

Not intended for a movie soundtrack, "Return to Sender" was so well received following its October 2, 1962, release that it soon found its way into Girls! Girls! Girls!. Elvis sings with great intensity and enthusiasm, making for a very catchy three minutes.

After venturing into lightweight pop tunes, Elvis returned to his rock 'n' roll roots with this one -- giving an intense, emotional performance.

Directly inspired by Elvis's army stint in Germany, this tune was adapted from a German children's song and was featured in Elvis's first post-army movie, G.I. Blues.

Elvis was passionate about singing gospel, and in 1960 he got the opportunity to record an entire gospel album. "Crying in the Chapel" was recorded during that session but would not be released for another five years. A huge hit, it was definitely worth the wait.

After a four-year drought without a number-one hit, Elvis was back with "In the Ghetto," his most socially responsible song. The haunting lyrics come together with Elvis's passionate expression to create an experience that will move the coldest of hearts.

Released on August 26, 1969, this song has a similar feel to "In the Ghetto," which was recorded during the same session in Memphis. Both songs highlighted the now well-established maturity and emotional control that Elvis brought to his work.

By April 1970, Elvis was performing in Las Vegas, and "The Wonder of You" was the first hit to emerge from that phase of his career. After 14 years of number ones, he continued to push his vocal range, revealing new facets of his amazing gift.

"Burning Love" emerged during a very difficult period in Elvis's life. He lacked motivation, and his producer had to work hard to get him to record it. When he did record, he put the full measure of his angst into his music.

Just a few months before he died, Elvis dragged himself into the studio for what would prove to be his final recording session. When the King died, this song was climbing the charts. His tragic death undoubtedly gave it a boost.