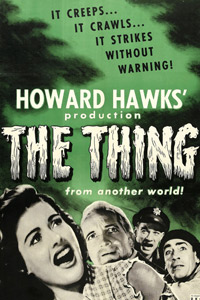 Contemporary audiences might find "The Thing from Another World" to be a campy, sci-fi romp deserving of a B-movie label, but film aficionados disagree, and so does the Library of Congress. As part of the National Film Preservation Act, which created the National Film Registry, in 2001, TFAW was forever enshrined in the registry because it was "culturally, historically, or aesthetically significant."

Out of context, it may be a little difficult to understand why the film warrants this level of serious attention. But when you peer through the lens of history to 1950s American life, the appeal and cultural significance of "The Thing" begins to make more sense.

The film was released at the height of the post-World War II Red Scare, when the American citizenry feared communism could infiltrate and affect politics and life in the United States. A sense of paranoia pervaded much of the media and society, creating fertile psychological soil for a sinister being that made little sense intellectually but was nonetheless completely terrifying.

Throw in the ideological clash between a military mindset hell-bent on immediately destroying every potential threat and a more objective, scientific perspective (events that were also mirrored in society at the time). Then trap all of these conflicting viewpoints in a claustrophobic and alien, barren North Pole landscape, and you had a recipe for interpersonal drama that symbolized conflicts on a much larger societal scale. Add in the fact that "The Thing" debuted only four years after the Roswell UFO incident in New Mexico, and you have a better understanding of why this film made a lasting impression on its viewers.

The movie also arrived as a trailblazer for the sci-fi movie genre. Its success spawned many other pseudo science-based, scary fiction films that captured the attention of the movie-going public for much of the 1950s. Its release occurred in the same year as "The Day the Earth Stood Still," which contrasted sharply with "The Thing From Another World." It portrayed a benevolent alien that arrives on Earth and is killed by defensive, anxious humans too close-minded to understand a greater picture of their place in the universe.

As for the newest Thing feature film, it's arriving at a time of terrorism, war and economic and political turmoil. Just like in the 1950s and the beginning of the Cold War era, there's a pervasive sense of gloom in some quarters and a feeling of general unease.

Some might even go so far as to say that even in an age where there's never been more freely accessible information, no one really knows who to trust. It's not hard to see how a vague, indefinable enemy emerging from some harsh landscape might appeal to the psyches of modern moviegoers.

It all took root, though, with those first plant-infested characters back in 1951. But just how possible would it be for a weird alien carrot to infect our race and take over the planet? Keep reading, and you'll find out exactly how worried you should be about turning into a blood-crazed turnip.