The Many Faces of The Thing 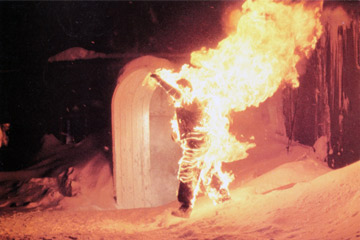 The classic response to The Thing? Kill it with fire!
Courtesy Mary Evans/UNIVERSAL PICTURES/Ronald Grant/Everett Collection

"The Thing" starred Kenneth Tobey, Douglas Spencer, Robert Cornthwaite and Margaret Sheridan. It also featured James Arness, who played the title role monster. Arness is most famous for his two-decade stint as U.S. Marshal Matt Dillon in the television series "Gunsmoke." Famed director Howard Hawks (listed as the movie's producer) reportedly let Christian Nyby take direction credit on this film as a favor to Nyby, although Hawks allegedly did much of the directing work.

As an adaptation of Campbell's book, the film only follows some of the plot's rough outlines. Perhaps the most notable deviation is that in the book, the alien isn't based on any sort of plant life. Instead, the entity is a shape-shifter that can take on the physical appearance and personality of its victims.

Armed with that person's memories and knowledge, the creature poses a threat to all of humankind. The alien takes control of one of the men and begins plotting its escape. But just before it gets away, the human survivors find it and kill the imposter before it can unleash its havoc upon the rest of the world.

That the movie featured a more vegetative antagonist than the book didn't bother audiences. In fact, the flick had a psychological impact strong enough to spawn two more films.

A 1982 version, called simply "The Thing," was directed by John Carpenter and starred Kurt Russell. This remake was filled with groundbreaking special effects and extra helpings of gruesome, bloody scenes. Though gory, this adaptation remained truer to the book, substituting any sort of malicious plant life with the shape-shifter that Campbell had originally imagined.

Unkind reviews contributed to the film's failure at the box office; it only made around $3 million on its opening weekend. Eventually, however, thanks to cable and home video, it garnered a cult following and gained a reputation as a classic, underappreciated work for its effects and chilling story. That's why in October 2011, another version of "The Thing" will hit theaters.

This time around, the movie is being billed as a prequel to the Carpenter adaptation. Directed by Matthijs van Heijningen Jr. and written by Eric Heisserer, the story is supposed to take place just days before the timeline of the 1982 film and is plotted so that it fits right into Carpenter's telling.

In this rendition of the tale, an American paleontologist (Mary Elizabeth Winstead) accompanies a group of Norwegian scientists (including Joel Edgerton) who, by chance, find a spacecraft that ostensibly crash-landed in Antarctica long ago. They also discover the frozen body of a creature that they deduce died during impact.

The scientists unwittingly thaw out a bloodthirsty monster, which can assume the appearance and personality of its prey. To prevent the ruination of human civilization, the scientists try (and, we hope, succeed) to stop their alien adversary.

Whether you prefer the 1950s Thing or its latest incarnation, there's a thread of similarity running through the plot and characters of each film. On the next page, you'll read more about why this Thing won't go away, and what these spooky stories really mean to us.

The eerie, droning sound heard in "The Thing From Another World" came from an early electronic instrument called a theremin. The sound was so effective that it was later used in many other sci-fi films.