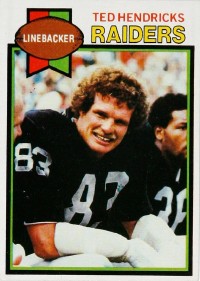 Ted Hendricks caused questions to abound when it came time for the pro scouts to rank the University of Miami standout. He was a three-time All-American who played defensive end and tight end, so what was the concern? Well, he was 6'7"and personnel directors argued that he was too tall and gangly to play linebacker.

At 215 pounds, the scouts said, he was too thin to play defensive end. Nonetheless, the Baltimore Colts decided to take the risk and drafted the "Mad Stork" in the second round of the 1969 NFL draft. It turned out to be an excellent move.

A tenacious player, Hendricks was deceptively strong and fast. And he was a devastating tackler. During his 15-season career, he intercepted 26 passes, blocked 25 field goals or point-after attempts, recorded four safeties, scored 26 points, and earned All-Pro or All-AFC honors eight times.

Seemingly impervious to pain, he played in 215 straight regular-season games, eight Pro Bowls, seven AFC championship contests, and four Super Bowls (January 1971 with the Colts and January 1977, 1981, and 1984 with the Raiders).

Surprisingly, the Colts traded Hendricks to the Packers after his five productive seasons in Baltimore.

The bigger surprise came, however, when the Packers allowed Ted to play out his option and join the Raiders after just one and possibly his finest season. That year, he had five pick-offs, blocked seven kicks, and scored a safety.

The Raiders, recognizing his unique skills, allowed Hendricks the rare freedom to freelance. Ted simply positioned himself along the line where he thought the play would go, then reacted. He was right so often that the coaches rarely challenged his decision.

Ted played nine seasons with the Raiders before retiring in 1983. He was voted to the Hall of Fame in 1991.