Browse the article Why does the strike zone change in baseball? 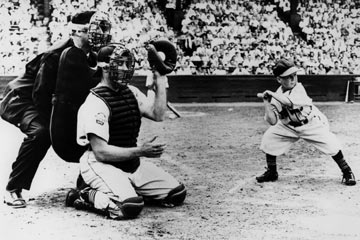 In August 1951, in a double-header against the Detroit Tigers, St. Louis Browns owner Bill Veeck sent in a batter impossible to strike out. His name was Eddie Gaedel, and at 3 feet 7 inches (1.1 meters) and batting in a crouched position his strike zone was only 1.5 inches (3.8 centimeters) high -- smaller than the diameter of a baseball. With four balls Gaedel was walked, securing this event as one of the greatest stunts in baseball history [sources: Authur, Veeck].

So, where's the strike zone? The best way to think of it is as an imaginary box or rectangle over home plate. If a pitched ball passes inside the box and the batter doesn't swing, it's a strike. If the ball passes outside of this box and the batter doesn't swing, it's a ball. But the strike zone doesn't have set coordinates. In fact, the strike zone varies from batter to batter and, in many cases, from umpire to umpire -- making it one of the most subjective and interesting elements the game of baseball has to offer.

The ideal strike zone is based on the body and stance of the batter. The top of the strike zone box is halfway between the top of the batter's shoulders and the top of his pants. The bottom of the strike zone is just below the kneecap. The vertical sides of the zone coincide with the edges of home plate. Together, these four sides make a box within which the ball must pass for a strike to count [source: Major League Baseball]. As a result, a tall batter has a larger strike zone than a short batter, and a crouching batter has a smaller zone than one who stands up straight.

In 1876, the strike zone was between the shoulders and the knees, and it stayed that way for more than 60 years. Over the years, however, Major League Baseball (MLB) occasionally tweaked the parameters of the strike zone if it seemed like someone had an advantage. For example, in 1961 Roger Maris had a record number of home runs, so in 1963 the MLB increased the size of the strike zone -- moving the top of the zone from the armpits to the shoulders -- to make it easier on pitchers. But in 1968 batting averages dropped drastically, so in 1969 the MLB moved the top of the zone back down to the armpits to make it easier for batters [sources: MLB, Sullivan].

Who's in charge of determining whether a ball passes within the strike zone? The umpire, of course, which leaves a fair amount of play-calling up to the judgment -- and vision -- of the ump. For example, the height and position of the umpire means an umpire's view of the strike zone can vary. Each umpire is different, calls differently, sees differently, and makes different decisions. Some call 'em high, some call 'em low, but this is an understood variable of the game. However, some evaluations indicate umpires call the strike zone with 95 percent accuracy [source: Koney].

All of these factors mean the strike zone is not as set as you'd think. For more baseball magic, take a look at the links on the next page.