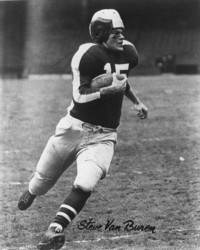 Handing the ball to Steve Van Buren was the surest way to gain yardage in the NFL in the years right after World War II. Everyone knew he was going to smash off tackle all day, yet no one could stop him.

At Louisiana State, the solidly built 200-pounder had been a blocking back until his senior year, paving the way for star Alvin Dark, who went on to baseball fame.

When Van Buren (born 1920) ran for over 800 yards in his final season with the Tigers, Philadelphia made him its first pick in the 1944 draft. He broke in with a bang, leading the league in punt returns and rushing for 444 yards.

The following year, he led the NFL in rushing and kickoff returns. In a 10-game season, he scored 18 touchdowns -- nearly two per game.

Nevertheless, some regarded him as a "wartime wonder" who would fade once the "real" stars returned. Rather than fade, he got better.

Van Buren was a 9.8 sprinter in the 100-yard dash and surprisingly shifty in an open field. But he was foremost a power runner -- the kind it hurt to tackle. He never seemed to tire. By the fourth quarter, he still slammed into opponents just as hard as he had in the first quarter.

The Eagles' success was tied to Van Buren. In 1947, he led them to their first division championship as he became only the second NFL runner to rush for over 1,000 yards by gaining 1,008.

He easily could have had a second 1,000-yard season in 1948 when he gained 945 yards, but he sat out a game against a weak Boston club to save himself for the championship game.

In that famous title tilt, played in a blizzard, he scored the only touchdown on a fourth-quarter smash. Van Buren took the Eagles to another league championship in 1949 while setting a new rushing record with 1,146 yards. In the championship game, he rumbled for 196 yards. He retired with the then-NFL record of 5,860 rushing yards.