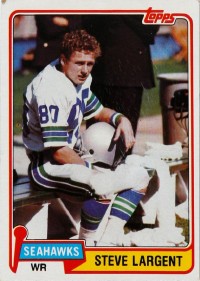 Steve Largent had the surest  hands in the league. See more pictures of football players.

Steve Largent held six major pass-receiving records when he retired from pro football: career pass receptions (819), 50 or more receptions in a season (10), consecutive games with at least one catch (177), yards on pass receptions (13,089), seasons with 1,000 or more yards on receptions (eight), and career touchdown receptions (100). All this by a receiver who the Houston Oilers thought was too small and slow to make it in the pros.

An All-Missouri Valley Conference wide receiver at the University of Tulsa, Largent (born 1954) was selected almost as an afterthought by the Oilers in the fourth round of the 1976 draft.

He caught only two passes before being cut following the Oilers' fourth pre-season game. "I cried all the way from Houston to Oklahoma City," Largent admitted. "I thought football was over for me."

Instead it was just beginning. Seattle Seahawks assistant coach Jerry Rhome, who had been on the Tulsa coaching staff, recommended Largent to head coach Jack Patera.

The expansion Seahawks gave the Oilers an eighth-round draft pick for the castoff receiver. It was the catch of the century for the Seahawks.

Largent became an almost instant star with the Seahawks with 54 receptions, third best in the NFC, in his rookie season.

A possession receiver with just average speed, Largent quickly became known for his precise routes, sure hands, determination, and concentration.

His complete mind and body coordination allowed his body to talk, lie, cheat, and steal on the best defensive backs in football. "Running routes became a science to me," Largent said. An NFL Man of the Year winner (1988), Largent was elected to the Pro Football Hall of Fame in 1995.