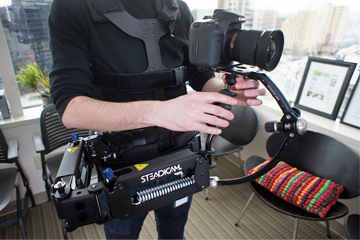 The Steadicam Merlin 2, pictured here at the HowStuffWorks office, is one of the next-generation, smaller camera stabilizer systems available to pros and amateurs.
©HowStuffWorks 2014

You don't have to be a Hollywood director to enjoy footage produced by a Steadicam. Camera stabilizers have become mainstream and well within the budget of many amateur photographers. In fact, camera stabilizers have shrunk to keep up with increasingly small cameras in the hands of amateurs. Some, like the Steadicam Curve, created for the GoPro Hero camera, are small enough to carry in a back pocket. Snowboarders, skateboarders and outdoor enthusiasts in general love the Curve because it allows them to create short clips of their friends as they do their stunts on the half pipe or in the bowl. The $99.95 price for the Steadicam Curve Black isn't a budget-buster.

Apple got into the video-stabilization game by incorporating the technology on its iPhone 4S and iPhone5. While the footage shot with the 4S is vastly superior to the iPhone 3GS or the iPhone 4, it's the Steadicam Smoothee that may thrill mobile cinematographers. The Smoothee is a plastic stabilizer that hooks up to the iPhone. The phone snaps onto a gyroscopic base attached to a pair of curved metallic tubes that extends downward for balance. As one reviewer said, "the Smoothee is a dream come true for home moviemakers ... " [source: Bookwalter].

Speaking of iPhone 4s, iPad2 and iPad Touch for that matter, we've also seen apps like Luma that would take the wobble out of what would normally be a herky-jerky video shoot. Instagram, however, snapped up the Luma app and incorporated the technology into its Cinema feature. The Steadicam Pro software irons out the bumps in hand-held video, correcting in real time as you shoot [source: Sorrel].

If you're really into cinematography and don't mind shelling out a few bucks, the Steadicam Zephyr may be what you're looking for. Its arm can hold a 23-pound (10-kilogram) camera that allows an operator to swivel the camera smoothly. The arm also can be broken down into two pieces, which makes transporting the device much easier. The price for one of the more expensive Zephyr models tops $11,000 [source: Tiffen.com].

For more information on Steadicams, including video footage of Steadicam operators at work, check out the links below.

Steadicams, of course, aren't the only camera stabilization systems out there. Glidecam Industries, for example, offers models for use with motion picture cameras, video cameras and video camcorders. VariZoom and other companies operate in this space, too. For the DIY crew, people also have been known to hack their own stabilization systems together, too.