Steadicam Shots on the Silver Screen 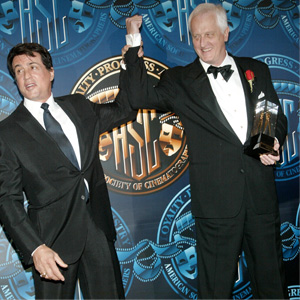 This 2002 awards ceremony wasn't the first time that Sly and Garrett Brown had hung. Brown had chased Stallone up the step of the Philadelphia Art Museum back in the '70s for "Rocky."
Frederick M. Brown/Getty Images

Steadicam operators have helped create some of the coolest shots in film history.

Martin Scorsese, Paul Thomas Anderson and many other directors have used extremely complex Steadicam sequences to establish mood and setting. In "Goodfellas" (1990), Scorsese employed a Steadicam to bring the viewer into the bustling Copacabana restaurant. In a single five-minute shot, the audience follows Ray Liotta and Lorraine Bracco in the back door, through the kitchen and up to the bar, stopping to meet patrons all the way. It's one of the movie's most mesmerizing sequences.

These stabilizer systems also are used in special effects sequences. For the speeder bike chase in "Return of the Jedi" (1983), operator Garrett Brown walked the camera very slowly through parts of California's Redwood National Park. The special effects crew sped up this footage and combined it with blue-screen footage of the actors on bikes for one of the most exhilarating chase sequences ever filmed. Without a Steadicam, the footage would have been way too shaky when it was sped up.

Steadicams have given filmmakers and moviegoers alike a new freedom of movement. With a Steadicam, a director can float the camera (and, by extension, the audience) into a forest, through a crowd of people, or down into a cave. In TV shows like "ER," Steadicam shots put the audience in the middle of the action, as if they were another character in the show.

Not only have these devices changed how movies are filmed, but Steadicams are now a mainstay in sports. One stabilized camera system, which goes by the name Skycam among others, is now a regular part of U.S. football games. First used with regularity during telecasts of the short-lived XFL, the computer-controlled stabilized camera is suspended by cables above the field and allows viewers to see a game as if they were flying high over the field. The Skycam's inventor was none other than Garrett Brown.