Bond Vehicles: Tools of the Trade 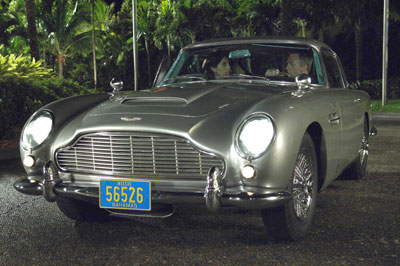 Not all of Bond's gadgets are small enough to hide in a pack of cigarettes. Wherever Bond goes, he goes in style, usually in a flashy high-performance car loaded with options generally not offered at your local luxury car dealer. Sad but true, retractable machine guns and rocket assist acceleration don't come standard.

In the first few Fleming novels, Bond drives a very unspectacular Bentley convertible with a revolver in the glove compartment. This was Bond's personal vehicle, not something supplied by Q. He was later given an Aston Martin DB III with changeable tail and headlight colors.

The signature Bond vehicle in the early years was a heavily modified Aston Martin DB5. The car was a spy's dream come true, with all the tricks and gadgets that a secret agent would never leave home without. Hidden machine guns and a hydraulic battering ram made the front end potentially lethal, while hub-mounted blades cut down the tires of anyone alongside. Bulletproof glass and steel armor plating provided protection, while a smokescreen projector and tire spikes could be released to deter pursuit from the rear. On-board radar, communications systems and a hidden cache of personal weapons meant the Aston Martin's operator was never out of touch or defenseless. In the worst-case scenario, an ejector seat could shoot the driver to safety. The car first appeared in "Goldfinger."

Later upgrades gave Bond access to more powerful and modern Aston Martins, including a V8 in "The Living Daylights" and a V12 in "Die Another Day." The V8 featured an armament upgrade, with front launching missiles replacing the machine guns. The 2006 film "Casino Royale" features an Aston Martin DBS.

In the late '70s and early '80s, MI6 apparently signed a deal with Lotus, as Bond was supplied with several modified Lotus models, including the aforementioned "Wet Nellie," a Lotus Esprit S1. Another Q-ified Lotus (an Esprit Turbo) showed up in "For Your Eyes Only," though Q had to replace it after the automatic security system caused it to blow up.

Pierce Brosnan as Bond, with his BMW Z8 from "The World is Not Enough."
Image courtesy DANJAQ/EON/UA/The Kobal Collection

In more recent films, Bond switched to BMW. The 750iL sedan used in "Tomorrow Never Dies" had classic features like a smokescreen, bulletproof panels and spike deployment for shredding enemy tires. It also boasted a sunroof-mounted missile rack, self-sealing and inflating tires and a pocket-sized control device that allowed 007 to drive the vehicle when he wasn't even in it. He also had access to a Z8 convertible that could launch laser-guided Stinger missiles. Not only could it be controlled remotely, it could locate and drive to Bond by itself. Of course, it was cut in half while in action.

Bond's adventures have not always been grounded -- he has had to take to the water and the air on several occasions. A Venetian canal gondola that hid a powerful hovercraft made for a perfect undercover operation, while the Q Boat was one of Q's most impressive creations. Jet-powered and armed to the gills, the craft could skim across shallow water and even dive beneath the surface. Bond blew it up.

For airborne escapades, Bond has flown "Little Nellie," an autogyro with rockets and missiles that could be folded down into four suitcases. The Acrostar was a similarly miniaturized jet plane with extreme maneuverability. James Bond once even flew on a space shuttle called the "Moonraker," though he needed someone else to pilot it.

There are a few pieces of equipment that James Bond never leaves home without. The first isn't really a "gadget." It's his Walther PPK handgun, worn inconspicuously in a shoulder holster. While not the most powerful gun in the world, it is compact and reliable.

007 usually has some sort of transponder with him so he can be located by MI6 if the need arises. It may be hidden in the heel of his shoe. He also likes to carry some type of hidden climbing device, such as a grappling hook that can be launched from his belt buckle. Tiny cameras and one-shot weapons disguised as mundane items also make Bond's list of must-have gadgets.