Browse the article How to Handle Parents While Coaching 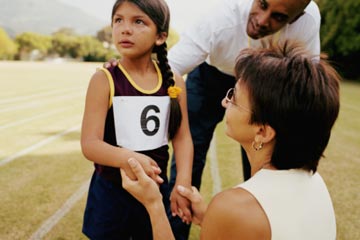 And then there are the kids.

Sadly, dealing with unreasonable parents can be the most difficult part of coaching youth. Many people who get into coaching youth sports do so because they want to make a difference in young lives. Coaches have an important role to develop character and encourage discipline -- and they may end up doing this for the parents just as much as for the young players.

Many coaches and teachers have been lamenting the increasing trend of "helicopter parents" -- that is, parents who constantly hover (like a helicopter) over their children and become overly involved and meddlesome in their kids' lives. Such parents may question a coach's every move or tend to believe that their child should be treated as more important than others.

Sometimes, the parents' unruly behavior stems from good intentions. Their protective instincts put them on guard to keep their child from getting injured. These parents might become irate at the slightest bump or scratch their children get, even if it is standard for that to happen now and again in most sports. Or, the overprotective type might be more sensitive to emotional injury -- they might complain that the child is being overlooked or humiliated.

Other parents suffer from an age-old syndrome: wanting to relive glory days. These individuals may yearn so much for their own high school days of being the star quarterback that they want to experience the thrill again vicariously through their child. They may fight tooth-and-nail to get a coach to award their child the star position or cry foul the second their child is benched.

Luckily, experienced coaches have come up with several ways to deal with these kinds of parents. Some highly encouraged methods can actually help prevent an ugly situation before it happens. And other tips we'll discuss will help you deal with a parent in the midst of a feud.

Communicating with Parents While Coaching

Countless coaching guides recommend having a parents meeting at the very beginning of the season, or even better, during the preseason. At the meeting, explain the details of what will be expected of the players and parents. Most importantly, take this opportunity to explain your coaching philosophy -- emphasizing your intentions to give every player a fair shot and your rules about playing time (if it depends on practice attendance, for example).

Also, be sure to explain your rules regarding parental involvement. This might include asking parents not to shout directions to their child during the game. Let them know that if they have a suggestion or notice a problem, they are free to come up in private to discuss it with you. Confrontations in front of the players are never a good idea. Encourage parents to attend practice if they want to. This should help you reach the goal of open communication and help parents better understand decisions you make on game day.

You need to encourage positive behavior from the parents, so that they can in turn encourage the players. Tell the parents that you can't have them negatively yelling at referees or at players. Or, if you don't ask parents outright to be positive, then at least express it by example. Stay positive and express that you're excited to be coaching their kids.

The parents meeting will not only give you a sense of what kinds of parents you're dealing with, but it will give you a chance to establish a good relationship with parents. The best way to do this is to make sure to open the floor for parents' questions.

If assembling a meeting isn't feasible, consider compiling a handbook, or at least write a letter to parents that addresses all these issues.

Although this open communication helps, it might not be enough to prevent meddlesome parents. So, let's get into the nitty gritty of how to deal with particular kinds of helicopter parents.

Various studies have shown the potential positive and negative effects of parental involvement in their children's sports programs. Although involvement can be supportive or encouraging, the danger of over-involvement can result in high stress levels for the child. In one study, researchers found that agreement and communication between parents and young players is important for a child's positive experience [source: Kanters].

Coaching children who have never played sports before is hard enough, but some will likely come equipped with overprotective parents who fret over everything that could go wrong. Often, such parents simply aren't familiar with the rules of the game or the common precautions. If that's the case, arrange a time to meet with them and explain the basic rules of the game and the rarity of injuries. If they get upset at small scrapes, discuss that these will likely happen, but that you always keep a first aid kit at hand. To quell their worries, you may want to ask an experienced referee official to speak with the parent for a few minutes about the game and potential dangers.

These overprotective parents may even have attitudes that are discouraging to a child's athletic development. They might assume that their child isn't good enough to compete, which naturally permeates into the psyche of the child. Be prepared to encourage kids out of this negative attitude.

Many newbie parents will take it for granted that, as a coach, you should give their child special treatment and pay more attention to him or her. Or, such parents will worry that their child's feelings will be hurt if they are ever benched. As we covered in the last section, discussing your coaching philosophy can help them understand all these things, such as why their child might not be playing as much as the parents want. If you need, meet individually with the parent to reiterate your rules on these points and your reasons behind them. At the meeting, let the parents express their concerns and address them -- show them that you care, even if you disagree.

Understandably, first-time players can be shy. Some coaches make a rule (and establish it at the initial parents meeting) that complaints about such things as playing time should first come from the player -- not the parent [source: Haefner]. This is a good way for children with overprotective parents to come out of their shell.

As hard as it can be to deal with overprotective parents, competitive parents are just as common and often more difficult. 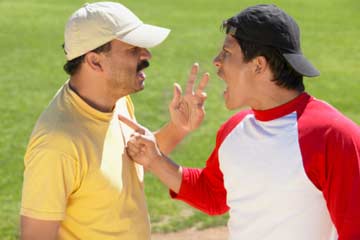 Sometimes competitive parents can get angry if they feel like you aren't treating their child like the best or giving him as much playing time as they would like.
Digital Vision/Getty Images

It's the coach's worst nightmare: an intrusive, competitive parent. These types are obsessed with winning above all else. They will disagree with your coaching decisions and confront you about it. Often, they think that their child is obviously the best player on the team and should be treated as such.

As we mentioned on the first page, this type of parent might simply want to relive his or her glory days. However, it might be more complicated than just that -- he might want his child to attain a scholarship. The parent will put the pressure of the child's future on your shoulders.

Some experts attribute growing parental involvement in youth sports to a trend in the United States over the past two generations. Because of cultural changes, they say, parents feel increasingly responsible for their children's achievements [source: Coakley]. And in some cases, parents who push their children in sports may even physically abuse them by overworking them [source: Hyman]. As a coach you can help diffuse such problems by insisting on rest, variety in exercises and open communication.

Stories of parental violence on the playing field occur around the country all the time, so you should deal with a problem as soon as possible. If a parent is becoming angry during a game, have an assistant coach assemble the team for a meeting at a spot out of earshot, and then you can discuss the problem with the parent to calm them down.

To prevent parent involvement during games, some coaches ask parents not to talk to them, players, or officials during games. If a parent confronts you and is angry about your coaching style, ask him to meet with you the next day. Let him vent at this meeting and listen to him. Try not to argue with him if he is still aggravated -- simply say you will consider his suggestions and do your best to incorporate them. If you can learn from these complaints, you can help avoid future incidents.

Don't let your emotions get to you when dealing with an angry or competitive parent. Maintaining a civil attitude will help them do so as well. Whatever happens, remember the child's best interest is what's most important.

Learn even more about youth sports and coaching by visiting the links on the next page.