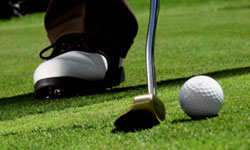 How can you improve your game on the putting green? See more sports pictures.
Medioimages/Photodisc/Getty Images

Golfing great Ben Hogan once described putting as "merely rolling the ball over the surface of the green by striking it with a gentle but firm blow" [source: Hogan]. Sounds easy, doesn't it? Of course, if it were easy, a lot more of us would be raking in big bucks on the PGA tour. It's cool to be able to step up to the tee and blast the ball down the fairway, but let's face it, putting is what separates truly great golfers from good ones. That's because putting is one of the trickiest skills of any sport -- a delicate mixture of muscle control and mental focus. When a skilled putter scrutinizes a 10-foot (3-meter) distance to the cup, pauses and then applies precisely the right amount of force to sink the shot, that triumph of mind over matter is a truly inspiring sight to behold.

In fact, you might call it downright poetic. Canadian poet and golfer T. Arnold Haultain rhapsodized in his 1912 treatise "The Mystery of Golf":

We can't promise we'll make your putting the object of such flowery praise, or that we'll make you into the next Ben Crenshaw or Jack Nicklaus. But here are 10 tips from various golf experts on how to improve your skills.

In a way, becoming better at putting is like giving up a bad habit. Before you can succeed, you have to stare yourself in the mirror and admit you have a problem. But instead of rushing off to a 12-step program, what you need to do is resolve to practice more. As golf writer Peter Morrice points out, if you shoot 90 for 18 holes and putt 36 times (that's an average of twice per green), that means that 40 percent of your strokes are made with a putter. That's more than the 20 strokes you'll probably take with the wedge, the 14 you'll take with the driver, and the 20 or so that you'll take with all the other various clubs in your bag.

Nevertheless, you probably don't spend 40 percent of your practice time working on putting. But if you want to decrease your score, that's exactly what you should be doing. Instead of spending all your spare hours at the driving range whacking balls off rubber mats with a driver, head out to your course's practice green [source: Morrice]. If you're really serious about your game, you can even build your own backyard putting green, using these instructions from Purdue University turfgrass science program specialists Clark Throssell and Zac Reicher.

Learn How to Read a Green 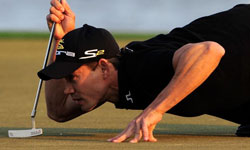 Camilo Villegas of Colombia looks over a putt on the 18th hole during the third round of the Honda Classic.
Sam Greenwood/Getty Images

This isn't a video game, where the green is just a colored background. Various greens have different physical characteristics, and you have to understand and compensate for how texture, topography and moisture will affect the speed and direction of your ball as it rolls toward the hole.

As Eric Alpenfels, Cary Heath and Bob Christina advise in their book "Instinct Putting," you should start evaluating the green while you're approaching it on the fairway because you've got the best perspective on the topography from a distance. Keep in mind that greens usually have what is called the "architect's slope," which enables them to drain quickly after a heavy rain. That generally means that the green will slope toward the fairway.

If your approach shot lands to the left of the hole, your putt will break from left to right. If it lands on the right side, it'll break from right to left. Short of the hole, you'll have an uphill putt, but if your ball lands beyond the hole, you'll be putting downhill. Another important detail to watch for is the fall line, or the contour of the green. If your ball is on the left side of the fall line, it will tend to break from left to right, while on the opposite side the reverse is true [source: Alpenfels].

Don't Worry About Looking Exactly Like Tiger Woods -- or Anybody Else

You might be thinking that you're actually glad that you don't look exactly like Tiger Woods, given his marital failings. But we're not talking about that, wise guy. What we mean is: Don't worry about copying Woods' exact stance, any more than you would strive to replicate the hunched over silhouette of Jack Nicklaus, whom Golf.com ranked as only second to Woods among the game's all-time great putters.

Instead, search for the stance and the posture that feels right for your own physique, and stick with it. It's true that there are some fundamentals that seem to work for most golfers. Golf writer Peter Morrice recommends that you use your hands and wrists to stabilize the putter, and to concentrate on using the arms and shoulders to actually stroke the club. That's the simplest technique, which means it's the easiest to replicate consistently [source: Morrice]. But if you feel more comfortable as a "wristy" putter, don't be afraid to do it that way. A young Arnold Palmer found that if he stood very close to the ball and kept the head of his putter square, using his wrists worked best for him [source: Palmer]. 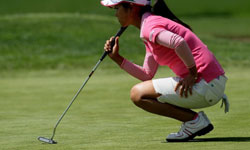 Golfer Ai Miyazato of Japan lines up her putt during the third round of the Kia Classic.
Stephen Dunn/Getty Images

It's not that important to stand like Jack Nicklaus, but you definitely want to listen to the Golden Bear's advice on how to hold the putter. In his book, "Putting My Way," Nicklaus explains: "To me, the most important consideration in putting is consistent fluidity of stroke, and grip firmness has a major influence on this." Most amateurs grip too tightly, he says. He recommends gripping the putter just firmly enough so that you can control its head path and face alignment, but not so rigidly that it can't swing naturally with its own weight and momentum.

Nicklaus also recommends applying exactly the same grip pressure on every putt, no matter the distance or angle. And he warns you to be careful not to change the pressure during the stroke itself, which will totally mess you up [source: Nicklaus].

Learn When to Think

Golf gurus have been preaching for years that the real secret of golf is mastering the mental game. But it's not enough to merely think through a shot in the moment before you tap the ball. As famed golf teacher Fred Shoemaker explains in his book "Extraordinary Putting: Transforming the Whole Game," you also have to pay attention at the moment that you're putting. Intention, he explains, has to be followed up with commitment to translate what you have visualized into action. He writes: "If we don't clearly choose a place to put our attention, the default place that our mind typically provides is 'How do I look?' or 'Did I perform well?'" And that's not going to help you put the ball in the cup [source: Shoemaker]. 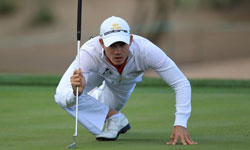 Golfer Camilo Villegas contorts himself into an interesting position to read the green.
Chris McGrath/Getty Images

When you're only a few feet from the cup, it's easy to aim the face of the putter and apply precisely the right amount of force. But what if you're trying to sink a 20-foot (6-meter) putt? A slight error in your alignment can throw you completely off, which is why long putts are enough to rattle the nerves of all but the most skilled golfers. And that's a pity, because your ability to make such shots can shave plenty of strokes off your score.

That's why great putters learn to compensate for distance by using a visualization technique called spot putting. Once you line up the shot, instead of aiming at the hole itself, focus on an imaginary spot along that line, approximately 3 feet (0.9 meters) in front of you. If you've visualized the putt correctly, the ball should roll on through that imaginary target to the hole [source: Morrice].

The Eyes Have It

In their book "The Secret of Golf: A Century of Groundbreaking, Innovative, and Occasionally Outlandish Ways to Master the World's Most Vexing Game," George Peper and Mary Tiegreen advise that where you look is one of the most critical details of putting. Looking out too far to the side beyond the ball will make you see an incorrect putting line -- that is, the path of the ball to the hole -- and throw off your aim. Instead, you should set your eyes directly over the putting line and look straight down at it. In turn, that also will help you to keep your feet and body parallel to the line, and you'll stroke along the proper path [source: Peper].

Practice Putting in the Dark

This is probably the most bizarre golf tip that you'll ever see, but it comes from the great Billy Casper, who was such a masterful putter that Ben Hogan once asked him for tips. "Putting in the dark is the best thing I ever did for my game," Casper explained in a 2005 Golf Digest interview. "On a pitch-black night, when you walk up to the hole just to see where it is, it stamps a very strong image in your mind. You develop a feel for everything: the moisture on the grass, the small change in elevation, the exact distance to the hole, all kinds of things your eyes alone can't tell you" [source: Yocom].

After you've made your putt, it's time to bask in your fellow golfers' admiration, right? Wrong. Golf guru Fred Shoemaker writes that it's crucial to take a few seconds and analyze your shot, to retain whatever you've learned from it. It's even more important to do that when you miss a putt. Evaluate how good your pre-visualization was. And how well did you keep it in your mind as you translated it into action? If you wavered in your focus, figure out what distracted you, and remind yourself to concentrate more fully next time. Shoemaker calls this the "debrief" of the shot, and sees it as a must for becoming a great putter [source: Shoemaker].

Keep Telling Yourself You're no Different than Ben Crenshaw 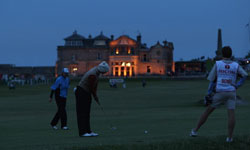 You're probably going to have a hard time believing this, but statistical data gathered by Golf Research Associates, which analyzes golfers at all handicap levels, shows that at certain distances -- inside of 3 feet, 10 to 20 feet, and 50-plus feet (0.9, 3-to-6 and 15-plus meters) -- you probably putt as well as the best golfers on the planet. The distances that differentiate the guys who win the green jackets from the bogeymen are 4 to 10 feet and 21 to 50 feet (1.2 to 3 and 6.4 to 15.24 meters).

Statistically, a pro is likely to one-putt from the shorter distance, while you're more likely to two-putt, and the pro will two-putt the longer distance, while you'll probably need three strokes. So think of it this way: If you can shave a stroke off each of these distances, you're going to become a pretty good golfer. You're going to improve the most if you learn at the longer distance to get most of your lag putts. That is, ones that fall short -- within 3 feet (0.9 meters) of the hole [source: Alpenfels]. 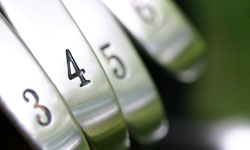