Best Golfers of All Time

Prev Next
The best golfers of all time span a century of excellence, and each generation has raised the bar for the next.

Legendary players of yesteryear such as Old and Young Tom Morris, Walter Travis, and Francis Ouimet set the standard for golfers like Henry Picard, Ben Hogan, and Byron Nelson, who dominated the greens during the first half of the 20th century.

Greatness begot greatness, as players like Gary Player, Arnold Palmer, and Jack Nicklaus came onto the scene in the 1960s and '70s. Those players laid the foundation for the current generation, most notably Tiger Woods.

The game of golf spans hundreds of years and has grown far beyond its roots in the rolling hills of Scotland. The links below will take you to profiles of many of the all-time best golfers, the people who have helped make the sport as popular as it is today. Check them out: 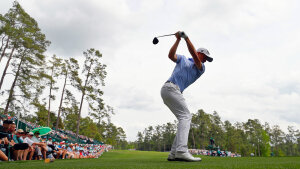