How to Start a Game of Ultimate 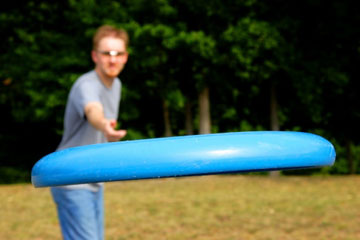 At the start of every Ultimate game, teams line up along opposite end zones. The game begins with a coin or disc toss to determine the teams' initial offensive and defensive roles.

A defensive player throws the disc as far as possible toward the other team in a kickoff like move called a pull. Then, defensive players run down field toward their opponents to stop them from moving the disc forward and scoring. Although there are a number of differences, Ultimate has been referred to as "touch football with a disc."

Although it has similarities to many other sports, including football and soccer, Ultimate's rules are entirely unique. The game doesn't even have a set time limit. It typically lasts until one team either scores 15 goals with a lead of at least two points or scores 17 total points. Each goal is worth one point. When teams tie at one point less than what the game was scheduled for (usually 14-14), they go into overtime.

An offensive player must catch a pass in her opponent's end zone to earn one point. Play stops whenever a point is scored. The teams then line up at opposite end zones for another pull, so the team that was playing offense switches to play defense and attempts to defend the end zone where they just scored.

Once the disc is in play, team members spread out to cover the field. Players assume different formations, but there are no hard and fast positions. Unlike many sports, in Ultimate, every player is allowed to occupy any position or area on the field that's not already occupied by another player as long as no physical contact is made.