How to Start a Table Tennis Club 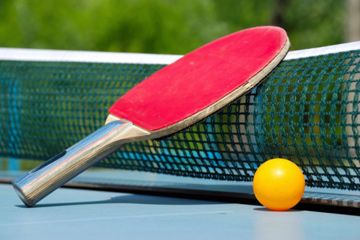 Played indoors or out, table tennis is a very popular game!
iStockphoto/Thinkstock

If you grew up in the United States, then there's a pretty good chance you've had a pingpong paddle in your hand at some point. It's a popular game for kids and adults, and it actually came from England, where it's known by its more formal name, table tennis. Today, table tennis has seen a strong resurgence in the United States, with trendy ping-pong clubs popping up in major cities all over the country. The trendy aspect may have something to do with the fact that clubs in New York and Los Angeles have become popular with celebrities like actress Susan Sarandon getting involved in club ownership. Her club, SPiN New York, is one of the more popular clubs in the Big Apple.

Chances are, most of your pingpong has been played against friends in your basement or in the rec-room belonging to a buddy. So why would you bother starting a table tennis club? Well, the same reason you'd start a bowling team, a dart league or a softball team. Starting a league or club means you have a range of competitors, you'll most likely have more space and better lighting, and you'll create a more social scene than you could in your basement. Read on to find out some tips on how to start your own table tennis club in your area.

The first thing you want to do to start your own club is to gauge the interest of others. If you can only get three people together, it's not much of a club. Drum up some interest among people you know and have them spread the word via the Internet and social media.

Next, you need to decide on what kind of club you want. It can range from an informal group that has a regular place to play to a real league with a management hierarchy to actually opening up your own business, kind of like a pool hall for table tennis.

If you want something informal and need a great place to play, then put the word out for spaces. Having a group of members in place helps this process out. If you want a more organized league, you'll not only need a place to play, but you'll also need to come up with the structure of the league -- teams, number of matches, tournaments, etc. You'll also want to structure the league hierarchy by electing a president, vice president and a secretary/treasurer to handle things like rules, dues and meetings. It helps to join the USA Table Tennis (USATT) organization, the leading pingpong body in the United States. It can help you with regulations and official club bylaws, as well as getting the word out about your club. If you have the will and you follow these steps, before you know it you'll be swamped with eager players, paddle in hand.