How to Play Rugby 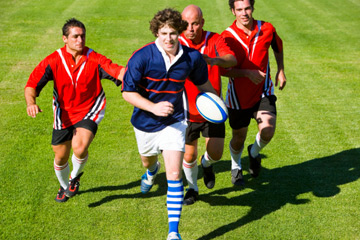 Be prepared to get hit -- hard!
Pixland/Thinkstock

If you're a rugby enthusiast, no one has to tell you it's a sport with a lot going for it. It has speed, strategy -- and body contact. That's a recipe for excitement whether you're playing in the game or just watching it on your trusty flat screen. American football owes its seminal beginnings to the game of rugby, and if you like your sports fast and unapologetically aggressive, these are qualities both football and rugby share to this day.

The origins of Rugby can be traced to the Rugby School in England in 1823, where an enterprising 16-year-old picked up the ball during a game of soccer (or a soccerlike variation) and ran with it. The boy's name was William Webb Ellis, and his unexpected rule breaking but dynamic move started a trend. It's a great story, and whether or not it's completely accurate to call William Webb Ellis the father of rugby (the story has its detractors), the sport does date from around this period.

It didn't take long for a little ball hugging to catch on big, and by 1840, running with the ball was an accepted practice. Jump forward a few decades to 1870, and soccer-football-rugby clones were being played in clubs all over England and the colonies, sporting their own rules with an enthusiastic disregard for decorum or uniformity. The Rugby Football Union was formed in 1871 to bring some consistency to the game by establishing a firm set of guidelines.

On the next couple of pages, we'll take a closer look at the positions, rules and scoring strategies that make rugby -- well, rugby. If you already know the rules of football you'll be confused until we straighten out a few details for you. After that, you'll discover that many aspects of both games are very similar.

A rugby team is made up of 15 players arranged on a grass field or pitch approximately 144 meters long by 70 meters wide, slightly longer and wider than an American football field. There are two 22-meter in-goal lines (end zones), and the object of the game is to deliver the ball to the opposing team's in-goal line as many times as possible during play.

There are eight forward positions (called forwards) on a rugby team. They perform in a manner similar to linebackers and linemen in football. They're sometimes referred to as the "pack." These are usually physically large, solid athletes that have to use muscle to gain possession of the ball. Six of the remaining seven playing positions are backs, and the central position is a halfback or scrumhalf. The backs are sleek, agile, smaller players that accomplish most of kicking and other ball handling necessary to move the ball up the field to the goal line. Once the forwards gain the ball, it's the halfback's (scrumhalf's) job to pass it to the backs.

Although standardized rules exist for rugby, there can still be some variation from nation to nation in the player designations. Some clubs use a numbering system from one to 15, while other clubs use letters.

Typically the first eight players represent the forwards. Of those eight forward players, the first three are sometimes called the "front row," and the first five players are alternately called the "front five" or "tight five." The last three forward positions are referred to as the "loose" forwards or the back row.

When listening to the commentary during a game of rugby, knowing the terminology will help you understand -- and enjoy -- the action better. Beyond the colorful group names for the forward positions, there are also position names for all 15 players on a team:

Rugby appeals to a wide variety of people. A number of names you'll recognize have played the sport at one time or another, including: J.R.R. Tolkien, Chris Farley, Russell Crowe, John F. Kennedy, Bill Clinton and George W. Bush.

The game of rugby is broken into two 40-minute segments with a five minute break in between. The ball looks a little like a football, but it's larger, typically more colorful and slightly more oval. The only timeouts in rugby are called for injuries. If a player is injured, he has 60 seconds to recover or leave the field. During the course of a game, teams are allowed to replace up to four injured players.

Play officially begins with a kick-off at the 50-meter line. A player in possession of the ball can run, kick the ball forward, or pass the ball to another player running behind him or to his left or right (laterally).

It's against the rules to pass the ball forward in rugby. It's also against the rules to protect or shield the ball carrier. (These are two major ways in which rugby and football differ.) Once the player with the ball is tackled, the ball is released and can be taken up by any player on either team. The convergence of players using only their feet to try and recover or steal a downed ball after a tackle is called a "ruck." It's one of the most common formations in the game. If a stopped ball never touches the ground, both teams can try for possession using a formation called a "maul" in which at least three opposing players use their hands (not their feet) to try and take the ball from the ball carrier.

A scrimmage (or scrum) is the method used to restart play after a rule infringement (penalty). In a scrum, the forwards from each team take opposing sides and squat shoulder-to-shoulder in three rows, heads interlocking at the spot where the infringement occurred. The scrumhalf not responsible for the infringement throws the ball down the lane created between the opposing teams' legs (the tunnel). The objective for each team is to hook the ball using only their legs and pull it back into their territory. To restart the match after a ball goes out of bounds, a lineout is thrown to the team not responsible for the out-of-bounds play.

To win the game, players have to score. So, let's move on to the specifics of how to score points and win a rugby match.

Unlike football, the play in rugby is continuous. This means that the game keeps going even when a player holding the ball is tackled or the ball hits the ground.

How to Score in Rugby

The objective in rugby is for a team to score as many points against the opposing team as possible during the 80 minutes of play. Since football is related to rugby, if you understand how points are awarded in football, you won't have any trouble understanding the scoring system in a rugby match:

Try - In a try, players receive five points for touching the ball to the ground between the opposing team's try line and dead ball line. It's like a touchdown in football and the fastest way to accumulate points in the game.

Conversion - Like the extra point after a touchdown, a conversion is a kick through the opposing team's uprights above the crossbar after a try. The place kick or drop kick is taken at a location in line with the spot where the ball touched the ground during the try. It's worth two points.

Penalty try - If a defending team prevents an attacking team from scoring a try through unsportsmanlike or underhanded means, the referee can award a penalty try worth five points to compensate the attacking team for the loss. Because no ball touches the ground to determine placement, a penalty try conversion is taken from a position directly under the uprights.

Penalty kick - Certain penalties provide the not-responsible team with an opportunity to make an unopposed kick through the penalty team's uprights for three points.

Drop kicking goals - Like the penalty kick above, a drop goal kick is worth three points. It can be attempted during normal play. The ball has to hit the ground and bounce up before it can be kicked between the opposing team's uprights. Of all the scoring maneuvers in rugby, drop kicking a goal is the least common because it requires great skill and flawless timing.

After a team scores during a rugby match, the non-scoring team kicks to the scoring team to restart play. During regular play, games can end in a tie, but in tournament play, tied games typically extend into sudden-death overtime to determine a winner.

It's easy to see the similarities between football and rugby. Both are exciting contact sports with a lot to offer spectators and casual players. Memorize the new vocabulary, and you have another entertaining sport to watch -- or play -- on the weekend.

The Rugby School in England has embraced its alumnus, William Webb Ellis, with a commemorative headstone in his honor that reads: "This stone commemorates the exploit of William Webb Ellis who with a fine disregard for the rules of football, as played in his time, first took the ball in his arms and ran with it, thus originating the distinctive feature of the Rugby game A.D. 1823"