Browse the article How to Organize an Intramural Program 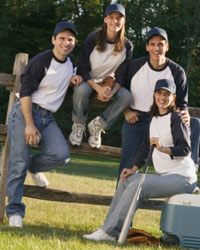 Organizing an intramural program is more complicated than meeting a few friends for an impromptu ball game.
Comstock Images/Getty Images

In a perfect world, everyone who loves sports would be able to rake in big bucks playing in a professional league. Unfortunately, going pro isn't an option for most of us, but just because you're not getting paid millions to toss a ball around doesn't mean you have to give up wearing a jersey after you graduate from high school or college. Sure, there's plenty of non-sports-related goals to contend with once we reach adulthood -- such as those pertaining to marriage, children and work -- but that's no reason to let a perfectly good passing arm go to waste!

Intramural programs are an effective and realistic way to stay in shape and get to know people your age. Countless amateur athletes around the country compete vigorously in sports like softball, soccer, football, tennis, volleyball, golf, kickball and basketball.

Established intramural programs likely already exist in your community, but if you can't find one that meets your needs, you can always start your own. So, if you've just moved to an area with lots of softball players looking for teams to join, hit a homerun for everyone and put a league together!

Keep reading to learn helpful hints on how to successfully start and maintain an intramural league that everyone will enjoy.

Tips for Starting an Intramural Program

Choosing a particular sport is your first goal. If you're planning on starting a league with a group of friends, take a poll to determine what everyone would most enjoy. It's your league, however, so if you're passionate about a particular sport, feel free to run (or skate or jump) with it!

Next, you need to decide the scope of your organization. Are you envisioning four small teams that rotate weekend games among each other? Or would you prefer dozens of groups, complete with matching jerseys and an end-of-season tournament? Obviously, the larger the scale, the more effort it's going to require on your end, so don't act on those grand ideas you've been kicking around until you've done some research.

Once you've determined the size of your program, you'll need to locate facilities for practices and games. The Web site of your county's parks and recreation department is a great place to find this kind of information (or to get the phone number of someone who will be able to help you). You'll need to determine the fees for renting park space, including the cost for lights, venders and anything else a burgeoning sports league might need. Once you calculate the total potential cost of your season (which will vary significantly between cities, counties and states), split the amount between your teams, which can raise the money through player dues.

Of course, you won't have much of a league without players and coaches. Advertise via word-of-mouth, social networking sites, free newspaper announcements or fliers posted (with permission) around town. Many adult leagues simply appoint a team captain, but anything youth-centered will require a volunteer coach, often a parent or teacher.

If you decide that starting your own league requires more effort than you anticipated, try looking into existing local programs. Joining a team is significantly less work than founding an entire intramural program, and your county's parks and recreation department and the local YMCA are both excellent resources for amateur athletes looking to join or start a team. Rates vary based on the sport, length of season and location, but are generally nominal and usually cost somewhere around $100 or less.

It's wise to consult an attorney before you get your league started to determine liability and other issues. Simply put, lawsuits over broken arms or head injuries aren't fun.