by Jill Jaracz
Prev NEXT
1

Path to the Pros?

If you think that joining a semi-pro team is your ticket to play in the NFL or in the Canadian Football League, you're wrong. Semi-pro players mostly play for the love of the sport. Sure, an occasional player has moved up to the NFL. Sometimes these are players who are cut from the NFL but spend some time working on their skills before getting called back up. All the same, these incidents are truly the exception and not the norm.

In fact, you might experience the opposite: Some players retire from the NFL but still want to play, so they join a semi-pro league just to stay in touch with the sport.

At any rate, it's best to set your expectations to make your semi-pro career a hobby -- one that allows you to experience teamwork with a diverse group of people who come together for their love of the sport. 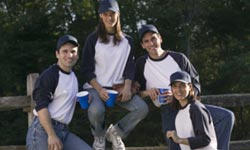