by Bambi Turner
Prev NEXT
5

It's hard to imagine that an Oscar-winning film about India's slums could be transformed into a funny intramural name for American basketball teams, yet somehow this unlikely connection works. According to ESPN, the name Slum Dunk Millionaires originated with a five-on-five basketball league at Notre Dame in 2009, with countless other teams using variations of the name since then. One popular version, Slam Dunk Millionaires, serves as a popular team name for slam-dunk or free throw competitions, though many standard intramural basketball teams also use it, including the 2010 University of Iowa women's champions.

The Peace Pelicans and Their Faithful Peerleaders

Founded in 2006, the Calvin College Peace Pelicans often wear crazy costumes and hairstyles to garner laughs, though they don't exactly have the best record for wins. The team has grown so popular that they have their very own cheerleading squad, the Peerleaders. 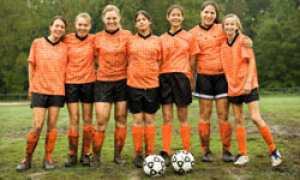