by Bambi Turner
Prev NEXT
10 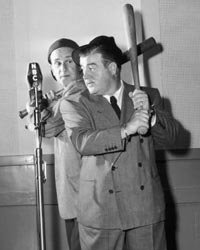 It's hard to imagine a more typical college experience than one that combines beer and sports. Of course, many schools strictly prohibit alcohol at all sporting events, including intramurals, but that doesn't stop students from turning to beer as a source of team-name inspiration. Booze on First serves as the perfect name for kickball, baseball or softball teams. This name, and variations such as Brews on First, was used by intramural softball teams at Brown University, kickball squads at Florida's Coastal College and countless other teams across the country. Beyond the obvious salute to booze, this name also offers a nod to the classic comedy team of Abbott and Costello, whose 1930s Who's On First? routine remains a pop culture touchstone more than 80 years after it was first introduced.