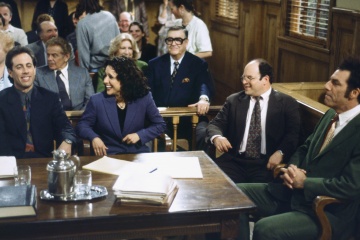 On May 14 of the year 1998, 76 million people were passing the time doing something that now seems as arcane as cheering gladiators at the Coliseum: They were all watching TV at the exact same time. The show was the last episode of "Seinfeld."

The producers had gone to great lengths to keep the plot a secret, and expectations were high. Too high, maybe. Co-creator and writer Larry David later said he regretted the secrecy because it meant everybody was bound to be disappointed. And we were. The finale turned out to be really bad. But that's not the point. The point is that we live in a different world now.

Here in the second decade of the second millennium, we all watch TV (if it can still be called TV) on our own schedules. And because some of the new producers like Netflix put out entire seasons all at once, some of us "binge watch" entire seasons in a matter of days (hopefully not in a single sitting — that just sounds unhealthy). And since we've all become individual broadcasters of our opinions thanks to Twitter and its ilk, we can instantly disseminate our thoughts on what we've seen to the four corners of the Earth at the touch of a few buttons. In other words, just one undisciplined (or malicious) viewer can spoil the next season of "Game of Thrones" for the entire planet.

So what are the rules governing spoilers? Is there a prescribed etiquette for talking about the stuff we watch? (And read; although, let's be honest, spoilers are mostly linked to viewing culture — readers don't tend to get as worked up about this stuff.) Actually there is: The good people at online entertainment news source Vulture have laid out some simple, but specific, rules for dealing with spoilers.

According to the Official Vulture Statutes of Limitations on Pop-Culture Spoilers, reality TV shows get no respect whatsoever. Everyone is free to spoil them as soon as an episode is over. However, with narrative TV, journalists must wait a day after a show has aired in its normal time slot before publishing any unmarked spoilers in the body of an article, and three entire days before allowing a spoiler to appear in a headline. When discussing movies, no spoilers are permitted in an article's text until the Monday after the opening night. We should wait an entire month before letting a movie spoiler slip into a headline. Plays get a month, books three months and operas a century.