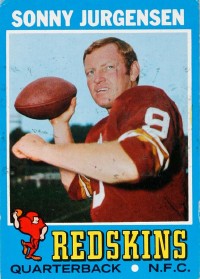 Sonny Jurgensen was a fun-lover  off the field, but he was all  business once the game started. See more pictures of football.

Quarterback Sonny Jurgensen dissected defenses with his pinpoint passing for 18 seasons, from 1957-74. The fun-loving redhead was a fan favorite. "I had as much fun playing as anybody," he said. "But on the field, it was serious business. I was interested in winning."

After two more seasons with the struggling Eagles, Jurgensen was traded to the Redskins before the 1964 campaign.

For the next five seasons, he and teammates Bobby Mitchell and Charley Taylor provided an air attack unlike any seen in the nation's capital since Sammy Baugh in the 1930s and 1940s. Still, the best the team could do was post a .500 finish in 1966.

A classic drop-back passer, Jurgensen was known for his poise under pressure. "All I ask of my blockers is four seconds," he said. "I beat people by throwing, not running."

In 1969, Vince Lombardi took over the Redskins' coaching reins. Many wondered if the taskmaster coach and the free-spirited quarterback could work together. The answer was a resounding yes. In fact, the two developed a mutual admiration for each other. "In five days, I learned more from him than I had in 12 years of pro football," Jurgensen said.

Under Lombardi, the 1969 Redskins finished second in their division, and Sonny won a second league passing championship.

A series of injuries, coupled with the defensively oriented philosophy of new coach George Allen, limited Jurgensen's playing time over the next few years. Finally, following the 1974 season, Jurgensen-one of the finest pure passers ever -- called it quits.