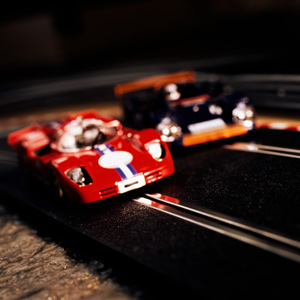 In the 1960s, America was in the midst of a cultural revolution, a war, finishing out a space race and starting a civil rights movement. Although much less historical in nature, an interesting hobby was beginning to form during that time as well: slot car racing. Now, decades after the slot car craze hit the United States, many enthusiasts still consider it as their hobby of choice.

Slot cars are miniature scale model cars that race along a fixed track. The "slot" in the name comes from shallow channels or grooves in the track that guide the vehicles through the twists and turns as well as on the straight sections. The grooves are lined with two metal rails that are narrowly separated and set into the track, creating a slot between them. You can purchase a slot car set, which includes all the necessary parts to start racing right out of the box; however, additional track pieces, car bodies, controllers and other various after-market components are available for purchase, too.

­Although slot cars gained popularity in the 1960s, it was way back in 1912 when the Lionel Corporation first created the original slot cars. Similar to model trains, these early slot cars sped along a raised track, and racers could increase or decrease the speed of their car by adjusting a switch on the track's power supply.

Slot cars are more than just tiny mock-ups of real cars, some are lovingly built from scratch by slot car enthusiasts and most cars, whether store-bought or hand-crafted, are modified for better performance. Driver skill plays a part in slot car competition, too. Aside from a small guide on the underside of the car, there's really nothing keeping the cars fixed onto the track, so some amount of driver proficiency is required to keep them from flying off in the turns.

To understand how this hobby caught on and why so many are still racing slot cars, let's look at some of the details of this hobby on the next page. 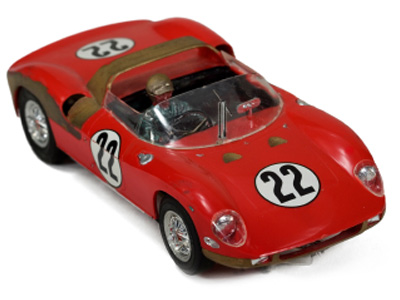 Some slot cars have a significant level of detail.
©­iStockphoto.com/Christine Glade

Slot cars come in a wide variety of sizes, but the most traditional and popular slot car size is the 1:32 scale. This scale means that for every 1-inch (2.54 centimeters) on the slot car there are 32 inches (81.28 centimeters) on a full size automobile. Other scale sizes include 1:24, 1:43, 1:64 and HO. The HO scale is a less-precise comparison measurement than the other scales, and is usually considered more of a toy for kids. The HO stands for half of the zero scale. The "0 scale" is the traditional size of model trains, which then became the comparison size for the HO scale slot cars.

Since the 1:32 scale is most commonly used as the scale of choice for hobbyists and slot car racers, let's take closer look at the breakdown of some basic elements of a 1:32 slot car:

The body (or shell) is a solid molded plastic piece that fits over the chassis of the car. As with real cars, the weight of the body and the distribution of that weight are a consideration in building a performance slot car. An interior section is usually attached to the body as well. Many cars even have a detailed driver figure, and most interiors tend to be only half the height of the body in order to leave room for the motor and other driveline components.

An electric motor can be placed in the middle, front or rear of the car. Motors are rated in revolutions per minute (RPM) or by their speed, which is determined by the amount of voltage the motor receives.

Copper or steel braids (or braided wires) provide power to the car by making contact with the rails on the track.

A guide (or guide flag) is the plastic piece under the chassis that guides the car along the slot in the track surface. The guide pivots in the slot and also holds the braids.

Gears (or gear sets) affect the slot car's speed and acceleration. Standard gears, such as the small gear attached to the motor (called the pinion) can be upgraded with aftermarket parts to increase performance.

Magnets are placed in the front and rear of the slot car to provide downforce on the vehicle to ensure that it doesn't come off of the track. Some slot car enthusiasts prefer to race without magnets and may choose to add lead weights to their car or simply race with no weights or magnets at all.

Some modern slot cars even have a microchip that allows them to operate on the same track as another car or to change to a different lane at pre-determined points on the track.

Almost all of the components of a slot car can be upgraded, refined, tweaked and improved, but without a track a slot car is nothing more than a somewhat realistic car model. Up next, we'll take a look at how slot car tracks are constructed and how they provide power to these miniature race cars.

A slot car track is made of plastic segments with two steel rails in each lane. These steel rails run the entire length of the track. One of the rails provides power to the slot car while the other rail provides the ground. Some slot car tracks are composed of several smaller track pieces which are clipped together using interlocking sections; however, other slot car tracks are made up of a relatively small number of longer sections of track which means that there are far fewer seams throughout the entire race circuit. This design also provides better or less-interrupted power supply to the cars.

Now that we know how the tracks receive power, let's find out more about how the cars handle the various types of tracks and how some tracks are built for realism.

While racing a slot car you may notice a slight burning smell after a while. In some cases, it may mean that the car's motor is starting to go bad and needs to be replaced, or if the car hasn't been run in a while it may emit the same burning smell. Heated power supplies also have a distinctive smell about them that racers recognize in an instant. However, those aren't the only scents associated with slot car racing. Some original slot car racers may notice the smell of 'oil of wintergreen' coming from their tires. The oil was used to soften the tires for racing and is occasionally used on the tracks and braids as well.

One of the most detailed aspects of slot car racing is often the track layout. While some slot car enthusiasts focus more on the racing aspect of the hobby, modifying their cars for speed and reliability, some take the time to build elaborate tracks complete with landscaping and plenty of other intricate details.

For instance, there are many different types of special track segments that can be added to a track to make racing more competitive. Some track pieces are designed to bring the cars closer together and force a racer to speed up and move ahead of another car or risk being pushed off the track. Other pieces create hairpin turns or steep inclines where the racer has to determine when it's appropriate to speed up or slow down.

Some enthusiasts prefer to take their cues from the cars themselves and model the tracks after real-world NASCAR tracks, rally courses, Formula 1 race circuits or other professional racetracks. There are several books and even computer programs to help racers design and build their own tracks. Some racers, who don't mind getting their cars a little dirty, may even build realistic rally-style tracks. These tracks simulate off-road conditions by adding elements like cocoa powder or flour to give the look and feel off their slot car driving through dirt or snow. Special slot cars are designed for optimum performance on these simulated rally tracks.

On more traditional tracks, some areas may be altered in order to increase the likelihood of crashes. These types of tracks are designed to test a racer's skill. Some sections of the track may have twists and turns built into them to simulate the effects of driving on ice.

Although tracks have a significant impact on how the car performs, slot car controllers affect the vehicle's speed and braking. We'll learn about the controllers next. 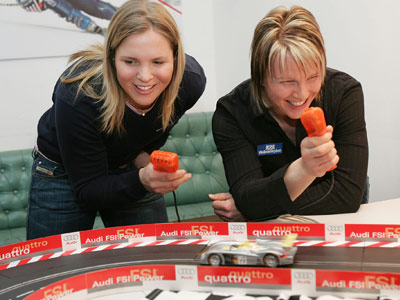 A slot car needs more than outright speed t­o win a race; it also requires controlled acceleration and breaking, too. Analog slot car controllers do this by distributing the desired amount of voltage to the car. A trigger on an analog controller moves an electrical contact along a resistor. As the trigger is squeezed, more voltage is sent to the slot car's specific track, which in turn increases the vehicle's speed. The controller's resistance is measured in ohms, and changing the amount resistance has a positive effect on the slot car's response time.

Some modern controllers offer slot car braking systems as well. Instead of just releasing or easing off of the trigger to slow the car down, some controllers come with braking systems that, at the push of a button, send negative voltage to the car's electric motor. This slows and stops the car much faster than a conventional controller can. Other even more advanced controllers allow racers to fine-tune the amount of braking power the controller applies to the car. Electronic controllers, unlike analog controllers, do not use the variable resistance method for power delivery, but instead use an electronic circuit to dispense the correct amount of voltage to the car. Improved car control and the ability to command a wide array of cars with varying magnet and motor setups are the primary advantages of electronic slot car controllers.

Remember, if you're in the market to buy an electronic controller, a new slot car motor or even a complete slot car racing set, it's always a good idea to do a little research. Find out what you like and don't like and pay attention to what other enthusiasts are saying, too. Spending a little extra time up front may end up saving you a lot of time, money and effort later on.

For more information about slot car racing and other related topics, race over to the next page and follow the links.