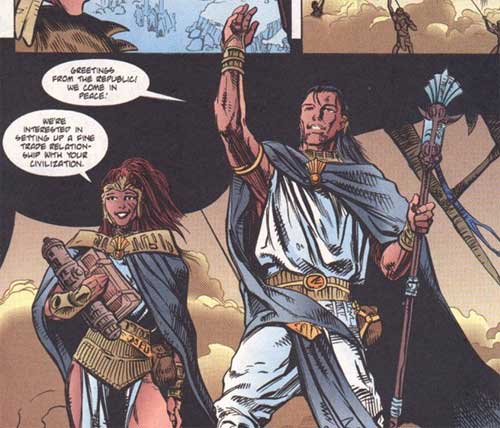 In the midst of a temporary truce, the two Dark Lord candidates Naga Sadow and Ludo Kressh convened to discuss the fate of Jori and Gav Deragon, the two hapless explorers who stumbled across the Sith Empire.

Kressh saw the intruders as a threat and wanted them executed immediately, while Sadow saw them as a path back to the Republic and eventual control of the Galaxy. Sadow eventually staged a rescue attempt on Korriban and blamed the Republic. Outraged, the Sith voted Sadow onto the throne of the Dark Lord and authorized Sadow's invasion of the Republic.

The Sith invaded and brutalized the Republic. The Jedi fought hard to defend the Republic, but in the end the leader of the Sith invasion force betrayed Sadow and turned the tide of the war. Sensing imminent defeat, Sadow detonated a nearby star, wiping out billions of Jedi, Sith, Republic forces and innocent people.

Sadow was exiled by the Sith, then took the remainder of his broken fleet and created a new Sith Empire on the remote world of Yavin IV. He ruled here until his death one hundred years later. All that remains of Sadow's Empire are the ruins of the Massassi Temples.