The Golden Age of the Sith 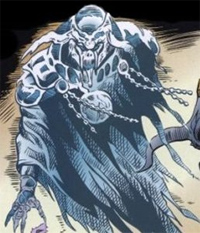 Ragnos defeated the previous Dark Lord Simmus for the title and Ragnos' rule ushered in the pinnacle of the Golden Age of the Sith. Ragnos was in power for nearly two hundred years. He brought unparalleled prosperity, growth and order to the Sith Empire. Ragnos was never successfully challenged and eventually died of old age. At his funeral two Sith Lords named Naga Sadow and Ludo Kressh began to duel over who would next hold the title Dark Lord of the Sith.

Sadow believed that the Sith needed to expand the Empire, while Kressh believed that the Sith needed to avoid attracting the attention of the Jedi. Both Sith Lords knew of the Jedi and the Republic, but knowledge of the Sith's ancient enemy was not something shared by many other Sith. After remaining hidden for thousands of years, the Sith were unsure if the Republic and the Jedi still existed.

Then two hyperspace explorers from the Republic accidentally crashed on Korriban, unwittingly providing the Sith with the proof and information they needed to declare war.

Sith is the Gaelic word for a fairy or sprite. Gaelic lore describes sith as good natured, tiny, winged creatures that live in the woods.