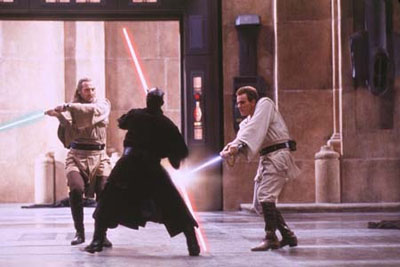 For several millennia, the Jedi Order have been the guardians of peace in the galaxy with the Force as their ally. The Jedi believe that the path to the Force is through contemplation, passivity, and inner peace. By disciplining themselves to remain calm no matter what is happening around them, a Jedi can access and use the power of the Force.

The Jedi regard the power of the Force with respect and responsibility. A Jedi views the Force as a power to merge with in order to further the cause of good. Jedi live by a very strict code that is built on tremendous discipline, selflessness and self-control. This is why very few Force adepts who begin training with the Jedi ever actually become Jedi Knights, and fewer still become Jedi Masters.

There is a common misconception that the Sith access the Force through evil or that being a Sith Lord automatically means that you are evil. This is not true. Any extreme emotion can access the Force. The essence of the Sith's power is in passion, not evil. Passion can take the form of joy or love as well as anger or hatred. Sith are typically evil in that they are often blinded by their passion or corrupted by the power granted to them by the Force.

This plays into the second major difference between the Jedi and the Sith. The Sith believe the Force is a tool to be used and that the power in and of itself is justification enough for their actions. In short, they believe they can do anything they want simply because they have the power to do so.

Differences aside, the Jedi and Sith share a common lineage, and the origin of the Sith Order starts in the very halls of the Jedi Council.