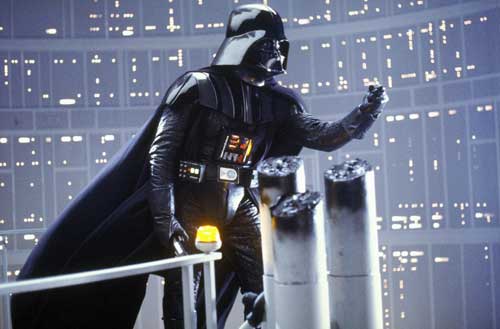 Man and machine, Darth Vader was the most legendary of all Sith Lords.
Photo courtesy © Lucasfilm Ltd. & TM. All Rights Reserved.Digital work by ILM

For twenty years the Empire ruled with an iron fist. The Jedi and the Force were long lost, but a tiny rebellion of politicians and warriors formed to oppose the rule of the Emperor. The first great battle of the Galactic Civil War was the Battle of Yavin. Rebel pilot Luke Skywalker made a force-guided shot that destroyed the Empire's mighty battle station, the Death Star. Darth Vader managed to escape the battle with his life and kill his former master Obi-Wan Kenobi.

After the Battle of Yavin, Vader took the Imperial fleet and scoured the galaxy, searching for the rebel base and more importantly his son, Luke Skywalker. Both Vader and the Emperor felt that Skywalker was a great threat but could be a powerful ally if he could be turned into a Sith Lord. Luke Skywalker had actually been training with Jedi Master Yoda, who hid for years on the backwater planet of Dagobah.

After Vader and his forces crushed the Rebels in the Battle of Hoth, he continued to search for his son. They eventually faced each other in a saber duel in Cloud City. After wounding Skywalker, Vader pleaded with son to join him. Vader wanted to destroy the Emperor, end the Civil War and rule the Galaxy together with his son as his apprentice. Luke refused and escaped.

The Empire built a second Death Star and the Rebel Alliance set out to destroy it. Skywalker knew his destiny was to face his father. He believed that his role was not to destroy his father, but to turn him back to the light side of the Force. Luke surrendered to Darth Vader and was taken before the Emperor.

The final battle of the Galactic Civil War was fought on many fronts. The Emperor lured the Rebels to the second Death Star and trapped their fleet between his own fleet and the functional, though incomplete, battle station. On the forest moon of Endor, a band of Rebels fought to knock out the shield generator that protected the second Death Star. In the Emperor's throne room, Jedi Knight Luke Skywalker fought for his destiny, as Darth Sidious tried to turn him to the dark side of the Force.

Luke eventually faced his father again in a lightsaber duel. After a moment of weakness revealed Luke's knowledge of his sister Leia to Vader, the Dark Lord promised to turn her to the dark side. Giving in to the dark side, Luke attacked his father and wounded him. Then he regained control and refused to fight. The Emperor, disgusted with Luke, began killing him with Force lightning.

Vader, realizing his life had been spared by his son, turned on his master and killed the Emperor. He died minutes later, after reconciling with his son.

The Rebels took down the shield generator and destroyed the Death Star. Both the war and the Empire were over.

In early drafts of the Star Wars script the Emperor was named Cos Dashit (I'm not kidding). Dashit ruled from the Imperial throne world of Alderaan. In later drafts, he was simply referred to as the Emperor.