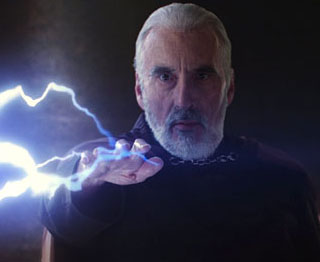 That revenge finally came almost two hundred years later, when a senator from the peaceful planet of Naboo rose to power as Chancellor of the Republic. Senator Palpatine orchestrated an invasion of his home world of Naboo, thus setting a series of deft political moves into motion. No one around him knew that Chancellor Palpatine was actually Darth Sidious, Dark Lord of the Sith. The Republic was now controlled by the Sith.

Sidious' first apprentice, Darth Maul, was killed in the invasion of Naboo by the Jedi Obi-Wan Kenobi. He later took a second apprentice, Darth Tyrannus (a well-respected Jedi and political idealist named Count Dooku), whom he used to lead the orchestrated Separatist movement that threatened the Republic with war.

Darth Sidious used the threat of war to justify the creation of a huge clone army. The Clone Wars had begun.

The Jedi and clone army fought side by side, eventually defeating the Separatists. Darth Sidious blamed the Clone Wars on the corruption of the Republic and used the special emergency powers granted to him during the wars to name himself Emperor.