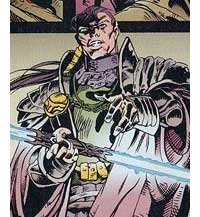 Four thousand years before the events of Episode I, the Sith Empire was extinct. It was born again in the hands of a Jedi named Exar Kun. Fascinated by the dark side, Kun secretly studied the Sith during his Jedi training. His research led him to the moon of Onderon. From there he traveled to former Sith home world of Korriban and later to Yavin IV. Exar led down the dark path by the ghost of Freedon Nadd who reavealed to all of the Sith's dark secrets to the curious Jedi. Kun was eventually seduced by the dark side and swore his allegiance to the Sith.

At the same time, on the recently war-torn world of Onderon, a secret society of aristocrats called the Krath practiced the rituals of the Sith right under the noses of the Jedi.

The Jedi Ulic Qel-Droma discovered the Krath and set out to stop them. In retaliation, the Krath had Ulic's master killed by assassins. Ulic vowed to destroy the Krath from the inside, so he faced them and joined the dark organization. He was not strong enough to resist, however, and Ulic eventually slipped to the dark side. As a Jedi, Ulic was the Krath's greatest instrument.

Eventually the power of two Sith amulets -- one possessed by Exar and one by Ulic -- led the two Jedi to one another. The two dark Jedi were ready to kill each other when they were visited by a council of ghosts made up of past Dark Lords. The shades instructed them to work together to resurrect the Sith Order and restore the former glory of the Golden Age of the Sith. With Exar Kun as the Dark Lord of the Sith and Ulic Qel-Droma as his apprentice, the two Sith Lords waged the bloodiest war in Galactic history -- The Great Sith War.

Exar Kun returned to the Jedi Academy and began luring students to the dark side. Ulic took a small group of ships and used dark side trickery to begin capturing as many ships as he could. He was to build the next great Sith Fleet. In his travels Ulic came across the savage Mandolorian Warriors as they attacked a peaceful planet. Ulic intervened on behalf of the planet, but only so that he could arrange a one-on-one battle to the death with the Mandolorian leader. Ulic bested Mandolore in hand-to-hand combat and then took control of the Mandolorian hordes, adding them to his ever-growing battle force.

Exar and Ulic allowed the Republic to learn of their invasion and lured the Republic fleet away from Coruscant. The Sith forces then attacked the Capitol world. Ulic was captured by the Jedi, but was freed at his trial by Exar. Exar killed his former Jedi master that day and then compelled other Jedi students to do the same.

Later in the war, Ulic unleashed a powerful Sith weapon that caused a chain reaction and destroyed many stars. The fallout from this chain reaction vaporized many systems, destroying the Sith fleet and killing billions and billions of innocent people.

In the final days of the war on the planet Ossus, Ulic faced and killed his own brother. Horrified at what he had become, Ulic fell apart and was defeated by a Jedi who used a forbidden Force block spell that destroyed Ulic's ability to use the Force forever.

The Republic eventually tracked Exar to Yavin IV and began orbital bombardment of the planet. Surrounded by the mutated descendants of Sadow's followers, Exar used powerful Sith magic to drain these followers' life force and seal his own in the walls of the Massassi Temple. Exar Kun's body was destroyed but his evil spirit still remains.