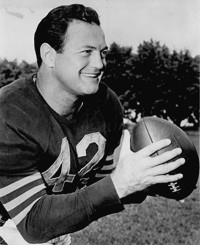 Sid Luckman presided over the most lopsided contest in NFL history -- the Chicago Bears' 73-0 massacre of the Washington Redskins in the 1940 championship game.

It was a historic occasion because it showed just how lethal the Bears' new T-formation could be. The "T" was an ancient formation, but the Bears added men in motion, flankers, new blocking schemes, and numerous deceptive tricks to make it new.

In the wake of that game, most teams scurried to copy the Bears' "T." Unfortunately for them, they did not have a Luckman to play quarterback.

Luckman (born 1916) had been a fine triple-threat single-wing tailback at Columbia.

Chicago coach George Halas, though, believed Luckman had just the combination of skills as well as the mind to run the intricate new formation the Bears were developing.

When he joined the Bears in 1939 and Halas handed him his play book, Luckman was shocked. There were literally hundreds of plays, and each had several variations.

As quarterback, Luckman handled the ball on each down. He had to know where every player was on every play as well as which play to call to take advantage of the defense. No player before had been given such a daunting mental task.

It took Luckman the better part of two seasons, but eventually he was able to amaze his coaches with his encyclopedic knowledge of the offense. Everything came together in that fabled championship game.

Certainly, Luckman's field generalship was a key to the four NFL titles and five division championships the Bears won in the 1940s. But his lethal long passes also contributed heavily to Chicago's success.

In 1943, when Luckman was voted the league's Most Valuable Player, he had his greatest single game, appropriately enough on "Sid Luckman Day" at New York's Polo Grounds.

Sid baffled the Giants for 433 yards and seven touchdowns in a 56-7 slaughter. He was nearly as effective in the championship game that year, throwing five touchdowns against the Redskins as the Bears wrapped up their third title in four years.