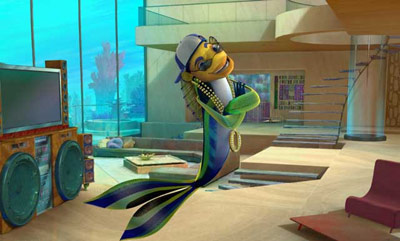 Oscar (Will Smith) dreams of a living in an upscale penthouse at the Top of the Reef.
Photo courtesy Dreamworks LLC

Since the animation was computer generated, the 70 or so animators first had to learn to make the switch from traditional methods. "This crew was mostly first-time animators on computer," notes Lignini. He continues:

Dreamworks has a very robust training program, and it took an animator about 12 weeks to go through the training. The main thing is to learn the animation program and to switch from the very intuitive and very spontaneous way of drawing animation to something you have to plan more and think of more, and do everything inside the virtual world. It's less spontaneous. It takes some people a while to adapt, to forget that the computer is a tool, and to bring back your animation skills. But everybody made the transition.

More than 200 people populated separate departments that handled background, lighting, surfacing, effects and characters. As a supervisor, Lignini was responsible for several sequences including the seahorse racetrack, the sharks confab, and the Whale Wash musical number, for which choreographer Nadine Colquhoun devised dance routines for the fish and other sea creatures -- including turtle waxers. "She demonstrated with her dancers, and we had to translate all the leg moves into fin moves. Whatever required too much gravity and weight, we had to find another way to express that in swim," explains Lignini.

One of his greatest challenges was animating the Rastafarian jellyfish henchmen Ernie and Bernie, voiced by Ziggy Marley and Doug E. Doug. "They were very complex, because of all the dreadlocks, their tentacles. The more bones and joints and contours in the skeleton of a computer character, the more difficult it is to work with them," explains Lignini. "Ernie and Bernie are constantly in motion, and we had to keep their dreadlocks from intersecting."

The animation process took a year and a half, but "Shark Tale" dates back to an idea that was developed in-house at Dreamworks -- "way before" the movie "Finding Nemo" hit screens, according to Letterman. "It happened right after 'Shrek'."

But the theme owed more to classic mob movies than other animated films. "I can't tell you how many times we watched 'The Godfather,'" says Letterman, who wrote the script. "We watched 'Goodfellas' and 'Some Like it Hot,' which is about a little guy getting in trouble with the mob."