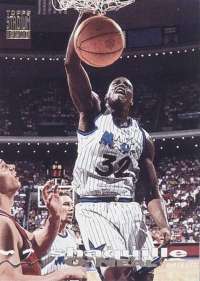 Shaquille O'Neal, or "Superman" in NBA vernacular, is one of the most dominant figures in NBA history. At 7'1'' and a solid 350 pounds, O'Neal is every bit the physical anomaly in his NBA era that history's greatest player, Wilt Chamberlain, was in the 1960's.

Born March 6, 1972, in Newark, New Jersey, O'Neal is the son of an Army sergeant. Shaquille lived in West Germany, attended high school in San Antonio, and signed to play at Louisiana State. O'Neal averaged 21.6 points in three seasons at LSU, leading the nation in rebounding in 1991 (14.7 a game) and in shot-blocking in 1992 (5.2 a contest).

O'Neal joined the Orlando Magic after his junior year as the first pick of the 1992 draft and, at age 20, became the first rookie to be voted to start in the All-Star Game since Michael Jordan in 1985. He ended 1992-1993 as the NBA's Rookie of the Year, averaging 23.4 points and 13.9 rebounds per game, leading the Magic to an increase of 20 wins over the previous season.

As a sophomore, O'Neal asserted himself as the most dominant big man in the game, upping his scoring to 29.1 points per game while maintaining a 13.9 rebounding average. Orlando upended Jordan's Bulls en route to its first NBA Finals appearance, where the Magic were upset by the Houston Rockets.

With the Bulls beginning another three-year run at the NBA's best club in 1995-1996, O'Neal bolted to the Western Conference with the Los Angeles Lakers. There he teamed with ascendant superstar Kobe Bryant and Jordan's old coach, Phil Jackson, to win three consecutive NBA titles (2000-2002).

O'Neal's attempt at a fourth straight title was derailed in the second round of 2003 playoffs by the San Antonio Spurs, and when the team was upset in the 2004 NBA Finals, L.A. management determined that the Shaq-Kobe alliance would need to be dissolved. Again reminiscent of Chamberlain, O'Neal found himself on his third NBA team that summer, after former Lakers coach Pat Riley engineered a blockbuster deal that brought O'Neal to the Miami Heat.

O'Neal made Miami an instant contender, falling in a hard-fought Eastern Conference finals in 2005 and, with new running mate superstar Dwyane Wade, bringing the Heat a title in 2006. Even as he played into his 30's, O'Neal was acknowledged as the most dominant force in the NBA when healthy.

While some have argued that he is the NBA's greatest player of all time, it's clear that "The Big Aristotle" has earned a spot alongside Chamberlain, Bill Russell, and Kareem Abdul-Jabbar among the best centers ever.