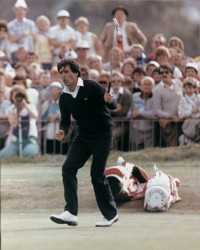 Seve Ballesteros dashed onto the golf scene with all the flair of the great matadors of his native Spain. Like the bullfighters, Ballesteros often flirted with danger.

Those who witnessed it will never forget the 1979 British Open at England's Royal Lytham and St. Annes.

The 22-year-old Ballesteros, tall and slender, darkly handsome, was swinging his driver with reckless abandon, and the ball was responding accordingly, flying every which way but straight.

With his driver, he would hit only eight fairways through the four rounds. One was not expected to win any championship with such wildness off the tee, but especially not at Royal Lytham, notorious for its narrow, oddly angled fairways and severe rough.

But Ballesteros's counter was an extraordinary talent for recovery around the greens; he was a brilliant pitcher, chipper, sand bunker player, and putter from in close.

At the start of the last round, Ballesteros was two strokes behind Hale Irwin and only one ahead of Jack Nicklaus, both far more conservative players and far more experienced in championship play.

Ballesteros took no heed, and he took the lead after the 2nd hole with a birdie and a par.

At the 6th, he hooked his drive a full 90 yards off-line, into the 14th fairway. His second shot went 50 yards through the green. He got his par. Continuing to play more often than not from the rough, he held his lead going into the back nine.

It was at the 16th, though, where his reputation was made for all time. On the 353-yard par-4, Ballesteros drove 30 yards off-line to the right and into a parking area for television production vans.

From there, he wedged to within 14 feet of the hole and made the putt that in short time ensured his victory. He was dubbed "The Car Park Champion."

Seve Ballesteros was born in 1957 in Pedrena, a small town in rural northern Spain. His father was a farm laborer who worked in fields near the golf course where Seve caddied and learned to play.

He began to play early, at around age seven, following the lead of his older brother, Manuel, who would also become a golf professional. To say Ballesteros played golf in those earliest years is not quite the word. He had come into possession of a 3-iron, the only club he would own for a year or so.

And, of course, the young farm worker's boy was certainly not allowed to play on the only course within many miles, a private club. He would in time, when his talent would be recognized.

Until then, these deprivations would turn out to be of great benefit. Seve would play every imaginable shot with that 3-iron -- low ones, high ones, draws, fades, hooks, and slices, hitting the ball out of deep grass in a farm field, off hard dirt roads, out of sand.

He often played his shots to tomato cans he sunk into the ground at the back of his modest home. Ballesteros would acknowledge years later that the versatility of his game, with all clubs, was born in those days with his lone 3-iron as his companion.

Because of his humble origins, a higher education was not in the cards for Ballesteros. His skill at golf was apparent while he was in his teens, and at the age of 17 he turned professional.

A scant two years later, having gained some experience playing the European Tour -- and winning once -- Ballesteros finished in a tie for second with Nicklaus in the 1976 British Open won by Johnny Miller. It was a stunning achievement for someone with so little seasoning at that level of competitive golf.

Seve liked the taste of it, and with what everyone came to know as soaring self-confidence, Ballesteros became a major factor on the European circuit and finally worldwide. From 1976-78, he won 11 tournaments -- 10 in Europe and one in the United States (the 1978 Greensboro Open).

Thus, in winning the 1979 British Open, he didn't in fact become a star overnight. It just seemed that way, because for the first time he was on a major stage, playing in the oldest championship in golf, and on international television.

Ballesteros was also a potent figure in the revival of interest in the Ryder Cup matches. Seve played on the European team seven times from 1979-95. And while with his play he won more than enough points for his side, it was as much his spirited, even emotional ardor for the competition that spurred the success of his teams.

In 1997, Ballesteros captained the European team in significant hands-on fashion. While other captains watched from the clubhouse, Seve was in the thick of things. The New York Times said he "sped around Valderrama…like a taxi driver in rush hour traffic."

His team took the tournament. Three years later he created the Seve Trophy, a team competition involving Great Britain, Ireland, and the European Continent. Recurrent back problems kept him off the tour for the next several years, as he worked at his course design business. He played in just two tournaments after 2005.

Seve took the European Tour Order of Merit (the money crown) six times, which was then a record. In 1988, he led the Official World Golf Rankings. For his career, he netted 94 wins -- 49 European, 9 PGA, 36 others. He was elected to the World Golf Hall of Fame in 1997, named on 92 percent of the ballots. He retired from professional play in July 2007.