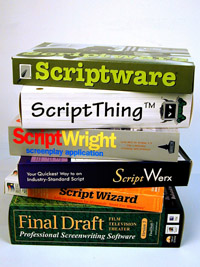 Screenwriter software is absolutely essential for both aspiring and professional screenwriters. The best reason to buy screenwriter software is to easily format your scripts to industry standards. Believe it or not, scripts need to be formatted differently for half-hour TV sitcoms, hour-long TV dramas and feature films. And to make things more complicated, specific shows have their own unique formatting conventions.

If you're going to be handing your spec script to producers and agents, they want to see that you've put in the time to learn how many spaces to indent character names, whether to capitalize scene descriptions, and that you know your FADE OUTs from your JUMP CUTs.

In the past, screenwriters had to do all of that formatting by hand-counting spaces with a pencil or a cursor, moving chunks of dialogue back and forth so they wouldn't be cut off by page breaks, et cetera. Now, with programs like Final Draft and Movie Magic Screenwriter, the software automatically formats the page as you type.

When you open a new project, the software allows you to choose from sitcom, drama and feature film formats. Final Draft even comes with pre-loaded templates for over 50 popular TV shows. These software programs even allow you to import raw text or Microsoft Word files and have them automatically formatted as screenplays.

Beyond its basic formatting capabilities, screenwriting software also helps streamline and organize the entire brainstorming, outlining and writing process. While brainstorming, you can jot your ideas on virtual note cards and begin putting them in order as scenes. Then you can expand those note cards into a more formal outline for the screenplay. As you write the actual script, you can have your outline and note cards windows open to keep your scenes and plot on track.

New features of screenwriting software include the ability to collaborate easily on scripts using extensive change tracking and commenting capabilities. The latest versions of Final Draft and Movie Magic Screenwriter both come with a handy text-to-speech engine that will read a script aloud using computerized voices that you can customize for each character. And Final Draft also includes a handy tool for automatically registering your completed script with the Writers Guild of America.

Another type of screenwriting software helps you develop your story before the writing process begins. Dramatica Pro is the best example of a new kind of screenwriter software that walks you through the process of creating and developing characters, drafting a satisfying story arc and tracking multiple themes and plotlines throughout a script. These are not idea-generating machines, but rather tools for helping a writer get the most out of his ideas. The software can identify holes in the plot, extraneous story lines or characters that need deeper backstories.

Now let's look at one of the most highly competitive ways to break into the screenwriting business: studio development programs.