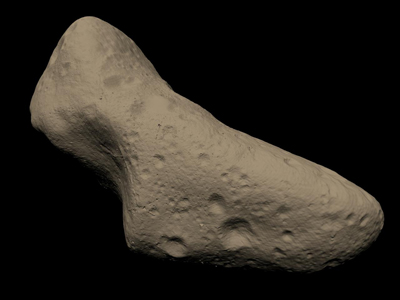 In the movie "Armageddon," astronomers spot an asteroid that will hit the Earth in a matter of days. The asteroid is the size of Texas and the impact will cause total annihilation of life on Earth (or at least the people on it). A crew of astronauts and oil drillers must land on the asteroid, drill 800 feet into it, implant a nuclear bomb, liftoff from the asteroid and detonate the bomb. The explosion will fracture the asteroid and send the pieces on either side of the Earth in a near miss that will save humanity. This rousing action-adventure story has little scientific basis.

A similar movie, "Deep Impact," was released at the same time as "Armageddon." The story line was similar, but it involved a comet instead of an asteroid. "Deep Impact" was less of an action-adventure film and handled the human side of what would happen in the event of such an impact. We know that such impacts have happened over the history of Earth and the solar system and even witnessed the impact of comet Shoemaker-Levy 9 into Jupiter (see How Comets Work).

We'll look at how sci-fi has made mistakes with antimatter, gravity and black holes next.