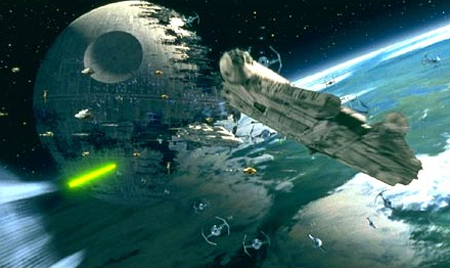 When the rebel forces destroy the Death Star in "Star Wars Episodes IV" and "VI," each Death Star goes out with a loud explosion. Such explosions happen in many sci-fi movies and TV series, such as when "Star Trek"'s Enterprise destroys an enemy vessel, or when the Nostromo self-destructs in "Alien." The problem here is that sound does not carry in space.

Sound is an example of a longitudinal wave. The sound energy moves along by vibrating molecules of gas, liquid or solid. When the bell in the above animation flexes away, it pulls in on the surrounding air particles. This creates a drop in pressure, which pulls in more surrounding air particles, creating another drop in pressure, which pulls in particles even farther out. Each vibrating air molecule passes its vibration on to the next air molecule between the bell and your ear to make the sound wave propagate. When the vibrating air in you ear canal hits your eardrum, it causes the eardrum to vibrate with the same frequency as the sound wave. The bones of the middle ear transmit this vibration to the inner ear, where the vibration sets up a standing wave in the fluid of the inner ear. The wave vibrates certain hair cells in the inner ear, which transmit nerve signals to the hearing center of your brain and you sense the sound. The important part of this process is that air molecules propagated the sound wave from its source to your ear. The same thing happens when you hear sounds underwater or through walls (liquids and solid propagate the sound waves as well). However, in the vacuum of space, there are no molecules to propagate sound waves and you don't hear anything. The movie poster of "Alien" was correct with its tagline, "In space, no one can hear you scream!"

Serenity was attacked by the Reavers and Alliance ships without a sound.
Image courtesy Zoic Studios/© 2005 Universal Studios

One example of the correct depiction of the lack of sound in space is Stanley Kubrick's classic film, "2001: a Space Odyssey." We see shots of the inside of spacecraft (Discovery, pods, moon vehicles) with sounds of machinery and alarms. When the scenes cut to the outside of these spacecraft, there are no sounds at all. Most dramatically, there is a scene where astronaut David Bowman must get inside the spaceship Discovery from a space pod without his helmet. He decides to decompress his space pod exposively to propel himself into an open airlock aboard the space ship Discovery. The film shows the explosion and subsequent propulsion of Bowman from the airlock in total silence. Sound only resumes when Bowman manages to close the airlock and let it fill with air. The sci-fi Western "Firefly" and its subsequent film, "Serenity," depicted a lack of sound in space as well. As with the visible lasers, most sci-fi films and TV shows accompany explosions in space with sound because it would be unsatisfying for the viewer to see an explosion and not hear anything.