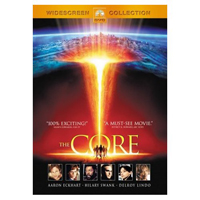 "The Core" bombed at movie theaters in part because it broke the laws of science fiction.
Image courtesy Amazon

There is a principle in movie making called "the willing suspension of disbelief," in which moviegoers can accept a certain level of implausibility in favor of the story. For example, fantasy stories rely on magic and readers and viewers accept this. This also happens with some science fiction stories. For example, the work may be dated. Jules Verne's "Journey to the Center of the Earth" was written before geologists knew anything about the internal structure of the Earth or plate tectonics, so you can suspend belief and enjoy the story. Finding the line at which viewers are unwilling to suspend their belief can be tricky.

So, science is important to make a work of science fiction and authors and film makers should strive to make the science in their works as real as possible. If the science is not real, the responses can vary. Some viewers may be willing to suspend their disbelief. "Star Wars" fans are certainly willing to suspend disbelief. However, if the science is too "out there," Viewers can be turned off. "The Core" was so unbelievable that it bombed at the box office. How filmmakers choose to tackle the believability factor could mean the difference between a success and a bomb.