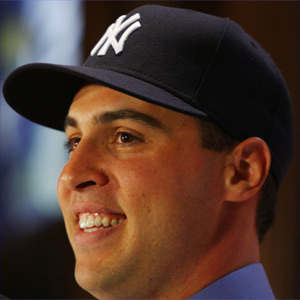 Listen up fans and fantasy baseball lovers: If you want to know how Mark Teixeira will do as a Yankee, try Baseball Prospectus' PECOTA prediction system.
Mike Stobe/­Getty Images

­Bill James has created dozens of sabermetric statistics, and others have contributed their own metrics. Many of these statistics have several different versions, with various organizations tweaking components of the formulas. So sabermetricians may rely on different formulas, but their style of analysis, their search for objective truth, their reliance on hard data vi­ewed in context -- all of these are part of sabermetrics.

Each sabermetric tool has its uses and drawbacks, but some are more commonly used than others. For example, EqA, or equivalent average, measures a player's hitting ability, accounting for factors like league averages, park effects and pitcher quality. A simplified version of EqA is calculated as:

Win shares is both the title of a Bill James book and the name of a sabermetric statistic that's been criticized by some sabermetricians and tweaked by others. Like its peers, it uses an immensely complicated formula, but it produces a single number that purportedly measures how much a player contributes to his team's wins. A player's win shares is actually how many wins he generated for his team multiplied by three. Multiplying by three creates larger numbers that emphasize the differences among players [source: Studeman].

Win shares are divided into three groups: hitting, pitching and fielding. Players who play more demanding defensive positions get more credit for win shares, as do high-strikeout pitchers because they don't require as much defensive help as a pitcher who gets a lot of groundball or flyball outs [source: Studeman]. Since win shares are based on a player's statistics for only one year, they're not good for predicting future performance but are useful for measuring a player's contribution to a team's success.

Another popular sabermetric stat is VORP -- value over replacement player. Developed by Keith Woolner of the Cleveland Indians, VORP uses an "average" baseball player as a reference point to determine value. For VORP, a replacement-level player is one who's below average. Often these replacement-level players spend a lot of ­time on the bench or shuttle between the highest level of minor league baseball and the majors

VORP doesn't take into account defense, but there is a modified version of VORP -- VORPD -- that does. The equation also considers position because some positions (like shortstop and catcher) are more demanding defensively, and players at those positions are usually not as talented offensively as first basemen or right fielders. The actual equati­on is very complicated, and there are several versions. But it does produce a single number -- say, 85.4 for Albert Pujols in 2006 -- that allows you to easily measure a player's value and compare him to others [source: Baseball Prospectus]. It also allows for comparing values of hitters and pitchers.

James later modified his original formula, using 1.82 as the exponent instead of 2, so the formula isn't perfect. But it allows someone to consider what role random chance plays, how many games a team was "expected" to win, or if, say, a team's record was skewed by an eight-game period during which its generally moribund offense caught fire and averaged an uncharacteristic 10 runs per game.

­For predicting individual player performance, Baseball Prospectus, a think tank devoted to baseball statistical analysis, uses a set of formulas known as PECOTA to predict future performance. PECOTA is a favorite of both fantasy baseball lovers and baseball professionals.