Browse the article What are the rules of the first base running lane? 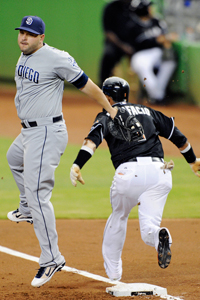 As he ran to first base on July 27, 2012, Miami Marlins player Emilio Bonifacio had to stay within the running lane, or risk being called out for interfering with Yonder Alonso of the San Diego Padres. See more sports pictures.
Ronald C. Modra/Sports Imagery/Getty Images

Baseball's first-base running lane is a 3-foot-wide (0.9-meter-wide) lane. Marked in chalk, it begins halfway between home plate and first base, stretching along the first-base foul line in foul territory. It ends just behind the first-base bag. The running lane can cause a bit of confusion, partly because the rules regarding its use are a bit complicated, and partly because the umpire has discretion when making a decision as to whether or not the rules have been violated [source: QC Baseball].

The basic rule states that runners heading to first base must run within the first-base running lane, which includes the chalked lines. Both feet must be within or on the lines. This is to help ensure that defensive fielders have a fair chance to throw the ball to first and/or catch it and get the runner out. There are two exceptions to this rule: Runners can step out of the lane at the last minute, when they're trying to touch first base via a final step, stride, reach or slide. And runners can head to first without running in the lane at all -- either to the right or left of it -- as long as they don't interfere with any throws by defensive players, and both of their feet are outside the lane [source: The Ole Ballgame].

It's definitely wisest to run inside the running lane, as you'll rarely be in danger of being called out for interference. The only way you will, in fact, is if you truly do interfere -- say, grabbing a fielder's arm or glove, or touching the ball. If you really want to run outside of the running lane, you'll need to keep two things in mind. First, an umpire can call you out simply by judging you're interfering with the fielders. And second, if you get beaned by the ball as the fielder is throwing to first, you'll automatically be called out for interference. No sympathy there. But the defensive player has to have made a "quality" throw -- one that had a reasonable chance of being caught. He can't intentionally lob it at you. On a positive note, if the catcher elects not to throw the ball to first because you're outside of the lane, that's not considered interference [source: Baseball Rules]. Only, perhaps, stupidity.

They say you learn something new every day, and I sure did when I researched this article. Despite having attended a fair number of ballgames in my lifetime, I never noticed the first-base running lane, let alone knew anything about it. Now I'm anxious to watch another game and look for it.