The Present and Future of Rotoscoping 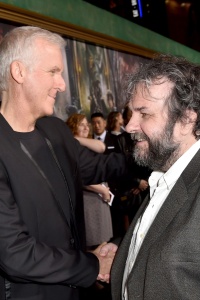 It's a safe bet that directors James Cameron and Peter Jackson will continue to drive the evolution of special effects filmmaking.
© Kevin Winter/Getty Images

Both rotoscoping and motion capture can allow for an actor's performance to come through in action rather than just voice on a graphically rendered character. But performance capture has the potential to turn an actor into any sort of creature the story requires, without the need for hours in makeup and costuming, and with an entirely realistic appearance and movement.

Still, it's an expensive process, and isn't always necessary to tell a good story. Although just about every film has special effects we don't notice, like the stripped out boom mic or day for night shots or more snow on the ground that is generally present during a spring shoot, they don't all have or need entirely CG characters.

All of these techniques give animators and other filmmakers ways to produce creative and stunning visuals. In live-action film, they allow for scenes that would be expensive, difficult, dangerous or impossible to film in a real-world setting. And new and improved digital tools are making it possible to create more realistic effects than ever, faster and more cheaply than before.

Despite all the new shiny toys, rotoscoping still exists as a viable tool in the arsenal of the filmmaker or graphic artist. It can be adopted for stylistic purposes to deliver a certain look and feel, as with Richard Linklater's "Waking Life" and "A Scanner Darkly." But it's also always on standby, ready to be used for filming flubs and other post-production compositing needs.

Researching this article has been educational in areas of film and animation history. I knew about some of the more obvious cases of rotoscoping in animations, like Ralph Bakshi's "Lord of the Rings" and Richard Linklater's "A Scanner Darkly," but I didn't realize how widely it has been used, and that it's still used so often. And I've always loved Max Fleischer's cartoons, but didn't know the whole backstory until now. In fact, the most fun thing about researching this article was that it pretty much forced me to watch a bunch of old cartoons.

And as far as motion capture, one only has to look at the differences between Gollum in Peter Jackson's "The Lord of the Rings" films and Gollum in the first "Hobbit" movie. It was fantastic before, but Andy Serkis's performance and the computer generated final character's facial expressions nearly make me cry in the newer film. I can't wait to see what the future of CGI holds for us.