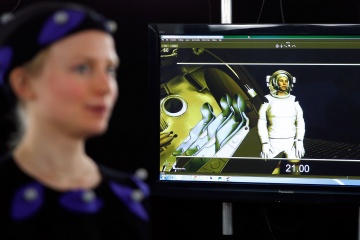 Movement of a performer wearing a motion-capture suit is translated digitally into a screen character.
© ADRIAN DENNIS/AFP/Getty Images

Another comparable and even newer technique is motion capture, sometimes referred to as mocap, and more recently dubbed performance capture. It's akin to both rotoscoping and color keying in that it's used to composite new moving elements (actors in particular) into scenes, and like the rotoscoping of old, it is often used to lend characters realistic motion and appearance. But mocap is a thing of the digital age that's bringing us much more realistic graphics and motion than anything that came before.

Originally developed to study motion, the process has been used in film and video games since the mid-1990s. It involves digitally capturing the motion of a live actor to create a 3-D computer model of the body and its motions. In its earlier incarnations, an actor would don a bodysuit covered with reflective markers or sensors and then perform alone on a sound stage surrounded by cameras. The data from the session would be fed into computer software that would generate a moving 3-D model of the performer and performance. Facial expressions, costumes and other details would be added by animators and other special effects professionals via graphics software in post-production. The technique was used to model some shots of Batman in "Batman Forever" (1995), crowd scenes in "Titanic" (1996), Jar Jar Binks in "Star Wars Episode I: The Phantom Menace" (1999) and Gollum (performed by motion capture virtuoso Andy Serkis) in "The Fellowship of the Rings" (2002).

But every mocap blockbuster seems to bring innovations that make the process even better. One major improvement was facial performance capture, which was used for the titular character in Peter Jackson's "King Kong" (2005), Davy Jones in "Pirates of the Caribbean: Dead Man's Chest" (2006) and all the Na'Vi in James Cameron's "Avatar" (2009). This was at first achieved with the use of sensors or reflective markers on the face, but for "Avatar," the actors wore form fitting helmets that had cameras in front of the actor's faces (attached via a thin arm) and had dots painted onto their faces. The camera captured every facial change, including lip and eye movements, and fed the data into software. The data was used to imbue each computer generated character with as much of the actor's real performance as possible, rather than relying entirely on post production animation using reference footage. The actors still had to perform on a set (wearing the helmets and bodysuits covered with infrared LED sensors and being filmed by Weta's "The Volume" motion capture camera system), but they were able to interact with each other.

Another big breakthrough came with "Pirates of the Caribbean: Dead Man's Chest" (2006) where Bill Nighy was able to do his entire performance on set with other actors (albeit in a marker-covered body suit and with facial markers). Effects house Industrial Light and Magic was able to add all of the CGI elements of Davy Jones later using the data that was captured on-set. In "Rise of the Planet of the Apes" (2011) and "Dawn of the Planet of the Apes" (2014) (also both starring Andy Serkis in mocap roles), performance capture was done outdoors on location using bodysuits with infrared LEDs and the helmet cameras.

And yet another incredible innovation was first used on "Avatar." A virtual camera with a monitor allowed James Cameron to view the actors' as their computer-generated characters along with the CG setting in real-time while the performances were happening. The technology was also used in Peter Jackson's "The Hobbit: An Unexpected Journey" (2012) and its sequels. The final, much more realistic results still come later after many, many man-hours of post-production, but it can be used to better visualize how a shot will really look and give direction accordingly. Plus the immediate on-set graphics are bound to get better with time.

Motion capture has also been used to create fully animated films, including "Final Fantasy: The Spirits Within" (2001), Robert Zemeckis's "The Polar Express" (2004) and "Beowulf" (2007). The former two suffered from complaints that the characters fell into "Uncanny Valley" territory, but those sorts of complaints seem to be diminishing with newer more realistic animations.