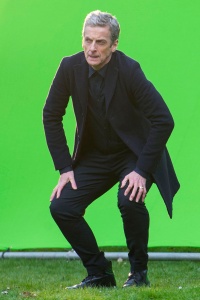 Actor Peter Capaldi working in front of a screen during filming for an episode of “Doctor Who.”
© Matthew Horwood/GC Images

There are some notable alternatives to rotoscoping for compositing special effects into films, and one of them is color keying, which is sometimes called chroma keying, and is often referred to by the color of the background on which the actors are filmed (such as blue screen or green screen). Blue screen color keying has been around since 1940 when it was used in the film "The Thief of Bagdad."

Another version of the same idea was used exclusively by Disney, where they filmed actors on a white background and lit them with sodium vapor lamps. This proprietary method was used to film and composite effects in "The Parent Trap," "The Absentminded Professor" and "Mary Poppins."

Green overtook blue as most commonly used when post production work went digital, since green is easier to light and digital cameras are better able to pick up detail in front of that color. Whatever the color involved, color keying is used to create traveling mattes more automatically by filming actors and other foreground items in front of a single colored backdrop and then using film or digital processing to remove that color (or everything that isn't that color) to produce mattes for background and foreground elements. It eliminated the need to manually outline and matte elements frame by frame and made the process much easier, although it comes with problems of its own. For instance, you have to make sure your actors aren't wearing anything that's the color of the backdrop. Plus most things are multicolored, so faint traces of those colors might be removed from your foreground subjects, requiring color correction.

And it isn't foolproof. Rotoscoping is sometimes used to fix mistakes on set, such as someone or something you are filming moving outside of the color screen area. If someone accidentally waves an arm out of the area, rotoscoping can be used to make a traveling matte of the part that isn't in front of the color screen to composite it into the film properly.