The Origins of Rotoscoping 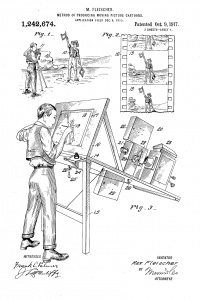 Artist and tech enthusiast Max Fleischer was the art editor for Popular Science Monthly when he came up with the idea of rotoscoping, with the aim of creating more fluid and realistic motion in animated cartoons. He enlisted the help of his many talented brothers (Dave, Joe, Lou and Charlie) to develop and test what would become a rotoscope device. Max filed a patent for the process and the related mechanism in 1915, which was granted in 1917.

The rotoscoping process required starting with film footage. For the Fleischers' first try, they went to the roof of an apartment building, with a hand-crank projector they had converted into a film camera, and filmed over a minute of test footage of Dave in a clown costume (sewn by their mother). Once that footage was made and developed, the rotoscope mechanism they had pieced together was used to project the film one frame at a time through a glass panel on an art table. Max would place tracing paper over the other side of the glass panel and trace over the still image. When done, he would move the film to the next frame and start a new drawing over the next image. The patent mentioned a possible mechanism to allow the artist to move to the next frame by pulling a cord from his current position.

Once all the images were drawn, they needed to be photographed one at a time. For their clown footage test, Max used the projector as a camera once again, this time exposing each drawn image to one frame of film by manually removing and replacing a lens cap for just the right amount of time, then incrementing the film. They had the film developed, played it back using the projector and found that the process had worked. And the animated clown, who would later be dubbed Koko, was born.

Max went on to animate, and his brother Dave to direct, many successful cartoons, starting around 1919 with the "Out of the Inkwell" series featuring Koko the Clown. Their later works included iconic characters Betty Boop and Popeye in the 1930s and the famously realistic (and expensive to produce) "Superman" short features in the 1940s. Rotoscoping was used to varying degrees in all of them to produce life-like character motion while still allowing the creativity and exaggeration that animation makes possible.

Fleischer also employed the technique in "Gulliver's Travels," which was released in 1939, making it the second full feature length animation produced in the U.S.