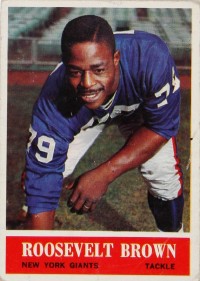 Roosevelt Brown went from  being a big tackle at Morgan  State to an even bigger one  for the New York Giants. See more pictures of football.

In the 1950s, the NFL's annual player draft went 30 rounds. Toward the end of the sessions, teams often found themselves casting around desperately to find names to fill the last few draft slots.

When the New York Giants reached the 27th round in 1953, they had no one left on their "wish list." Fortunately, someone in the Giants' front office dimly remembered reading about a big tackle from Morgan State on a Black All-America Team published in the Pittsburgh Courier. And thus, Roosevelt Brown became a Giant.

After signing a contract for $2,700, Brown (born 1932) arrived in training camp with a confidence based on his mistaken belief that he couldn't be cut from the squad.

The result was predictably brutal. But even though Brown took a fearful beating, Owen recognized Brown's potential. Technique, after all, could be taught. Within a few weeks, Brown became a starting offensive tackle for the Giants, a position he held for the rest of his 13-season career.

The Giants won the 1956 NFL championship and added five division titles from 1958-63. Most of the headlines went to the famed "DEE-FENSE" or such offensive stars as Frank Gifford and Chuck Conerly; as usual, the offensive linemen were more or less anonymous to the public. However, close observers recognized the contributions of Brown. He was named All-NFL nine straight years, and he was selected to nine Pro Bowls.

When Brown was named to the Pro Football Hall of Fame in 1975, he was the second lineman to achieve that honor on the basis of playing offense only.