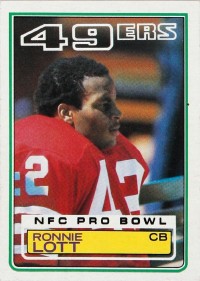 Ronnie Lott could be described in one word: passionate. One of the hardest hitting players ever to take the field, Lott played every down with a warrior-like attitude.

A throwback to another era, he tried to emulate former bone-jarring greats such as Dick Butkus, Ray Nitschke and Sam Huff. Most would agree he succeeded, and his 14 years of near-unparalleled play earned him the right to be compared to the game's best.

Lott, a consensus All-American in his junior and senior seasons at the University of Southern California, registered 250 tackles during his four-year collegiate career.

The Trojans' 1980 MVP, he led the Pac-10 with eight interceptions his senior season. As a result, the San Francisco 49ers made him their No. 1 choice in the 1981 NFL draft. He went on to become the defensive cornerstone of four Super Bowl champions.

Lott (born 1959) was the complete package. He had speed, strength, and a knowledge of the game that set him apart from most other defensive backs.

A student of the game, Lott had the uncanny ability of being able to sense the direction a play was about to take and then somehow disrupt it.

"To break a play down," he said, "you have to see it in slow motion." However he saw it, Ronnie Lott played hard, played clean, and played with passion.