The Bout: A Play-by-Play 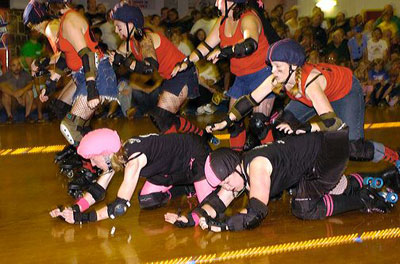 Hot Legs Hooligan describes a bout as "Very hectic and fast-paced. There's a lot happening at once. Depending on what position you're playing, and which jammer hits the pack first, you may be playing more offensively or more defensively...the adrenaline is flowing, and after a bout sometimes I can't remember parts of what happened because it was moving so fast."

The game itself is a series of races between two teams of five players. Each team's jammer is the only player to score points. Three blockers try to stop the other team's jammer while propelling their own jammer forward. Each team's pivot acts like the pace car in a NASCAR race and controls the speed of the pack. She also keeps an eye on the jammers, calls her team's plays and acts as a blocker. Helmet designs differentiate the positions -- jammers wear stars, pivots wear stripes and blockers wear blank helmets.

The jammers try to catch up to the pack, work their way through and come out the other side. No one scores any points during the first lap, but the first jammer to pass the opposing team's pivot becomes the lead jammer. A referee points out the lead jammer and follows her progress around the track. The lead jammer can "call the jam" before the end of the two-minute period by putting her hand on her hips.